Sindhu, who had won the title in the 2018 edition of the tournament, will now square off with He Bing Jiao in inconsequential last group match. 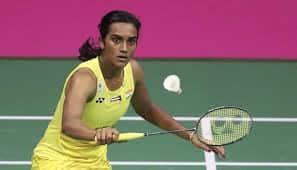 Rio Olympic silver-medallist PV Sindhu suffered a major blow as she slumped to straight games defeat at the hands of Chen Yu Fei of China in her second match of Group A in the BWF World Tour Finals 2019 in Guangzhou, China on Wednesday.

After comfortably winning the first game, the 24-year-old Indian failed to capitalise on the same and suffered a 22-20, 16-21, 12-21 defeat against Yu Fei in a thrilling clash that lasted one hour and 12 minutes.

Sindhu was trailing by 17-20 in the opening game when she rebounded strongly by saving three match points before eventually clinching the game with five straight points.

In the second game, the Chinese star was more dominant as she first took a 12-11 lead against Sindhu and then grabbed three points at 16-12 to force the match into the decider.

Sindhu came up with a much-improved performance in the decider as she took an 11-10 lead at break. However,  the Indian shuttler committed some unforced errors and Yu Fei bagged six game points to eventually emerge victorious.

Notably, it was second successive loss for Sindhu in Group A.

Meanwhile, Akane Yamaguchi of Japan bounced back from the opening game down to seal a 25-27, 21-10, 21-13 win over He Bing Jiao of China in the other match of the group, thus ending the Indian shuttler's hopes of making it to the semi-final of the tournament.

Sindhu, who had won the title in the 2018 edition of the tournament, will now square off with He Bing Jiao in  inconsequential last group match.