Previously all BWF World Tour and other BWF-sanctioned tournaments from March 16 to April 12 had been suspended due to the escalation of COVID-19 outbreak. 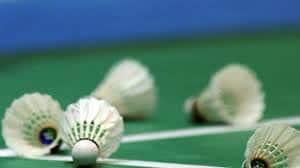 Three continental badminton championships were among five tournaments that the Badminton World Federation (BWF) on Friday announced were cancellation due to the COVID-19 outbreak.

"The health, safety and well-being of all athletes, their entourage, officials and the greater badminton community remain the top priority for all relevant parties," said a statement from the BWF. "Heightened travel and quarantine restrictions and the subsequent extreme logistical complications this has caused also contributed to the suspension."

All five tournaments were slated to be played within the Tokyo 2020 Olympic Games qualifying period, but will no longer contribute to qualifying as they will now fall outside the qualification window, BWF said.

Previously, all BWF World Tour and other BWF-sanctioned tournaments from March 16 to April 12 had been suspended due to the escalation of COVID-19 outbreak.

BWF added it will make a further announcement on any implications related to the Olympic qualification at a later date.

Coronavirus Outbreak: Badminton Association of India to work from home from March 23