In her latest Insta photo, Rani flaunting her curvaceous body in a black top, which she teamed with minimal accessories, a pair of earrings and her makeup on point.

New Delhi: Rani Chatterjee is a popular Bhojpuri actress with a huge fan base. With over 390k followers on Instagram, she is an internet sensation whose pics often go viral. Rani's recent Insta post has caught her fans attention once again and they can't stop going gaga over her.

In her latest Insta photo, Rani flaunting her curvaceous body in a black top, which she teamed with minimal accessories, a pair of earrings and her makeup on point. She left her beautiful tresses open and wavy. She captioned the picture as, "#newprofile #picture." 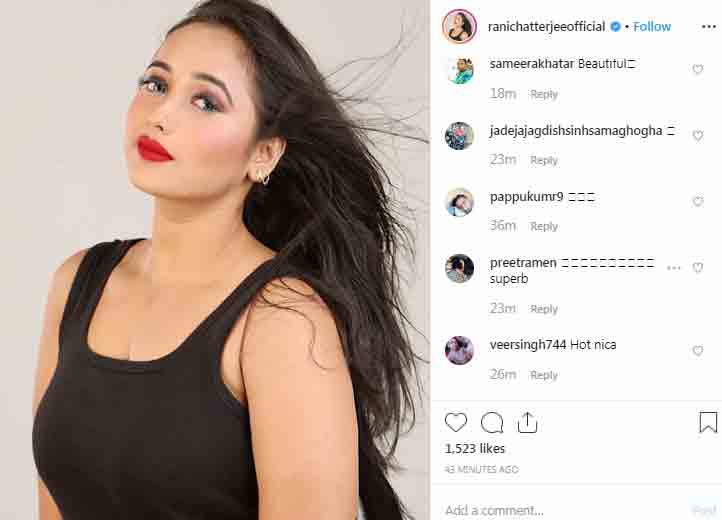 Chatterjee began her career by starring in 'Sasura Bada Paisawala' opposite superstar turned politician Manoj Tiwari. She made her debut back in the year 2004. In fact, she has worked with almost every A-lister from the Bhojpuri entertainment world.

She has several interesting projects in her kitty, one of them being  'Chotki Thakurain'. The film is being helmed by Shams Durrani. She often shares pics from sets of her upcoming films, leaving fans excited for the release. She was last seen in recent released 'Rani Weds Raja' alongside Ritesh Pandey. Currently, she is busy shooting for 'Bemisaal Khiladi'. Directed by Deepak Tripathi, the film features Rani and Rajinikanth Shukla in lead roles.

Apart from acting in films, she is known for her fitness prowess and often shares workout videos on Instagram, leaving her followers inspired to adapt a healthy lifestyle.