Bhojpuri singer private MMS leaked: Earlier this year in April when the MMS controversy erupted, the video showed the girl in a compromising position with her alleged boyfriend Vijay Chauhan. 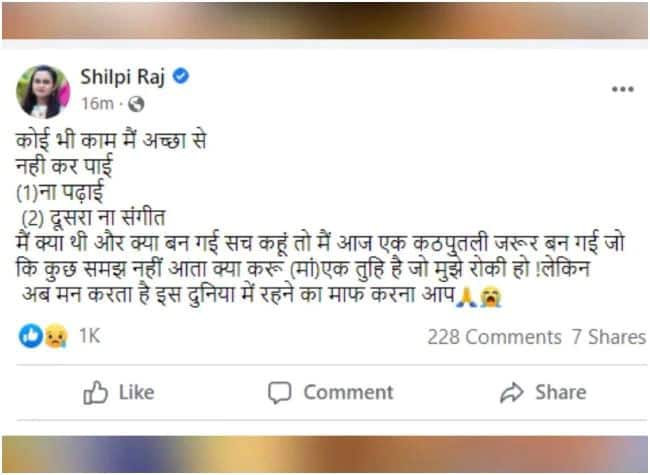 Shilpi Raj's Facebook post in English means: "I could not do well in anything (1) neither studies (2) nor music… what I was and what I have become now, to tell the truth, today I have become a puppet, I don't understant what to do (mother)...Only you were the one who stopped me...but now... I feel like living in this world, please forgive! (sic)."

Reacting to the viraal post, Shilpi Raj told News18, 'I had no intention of committing suicide. I wrote this post under the pressure of work. At the moment I am absolutely fine."

Earlier this year in April when the MMS controversy erupted, the video showed the girl in a compromising position with her alleged boyfriend Vijay Chauhan. Owing to the controversial nature of the video, Shilpi responded to development through a live video. She was seen crying and making an appeal to netizens to stop sharing the video.

Shilpi made her singing career debut in 2017 with the Bhojpuri song 'Bhukur Bhukur Light Barab Karejau'. She is known for her songs such as Du Hajara Leke Aaja Stage Pa, Apni To Jaise Taise, Laika Pahilka Ha, and Neeli Neeli Akhiyan.