Rani made her debut in 'Sasura Bada Paisawala' opposite superstar turned politician Manoj Tiwari. The film won her accolades and she got recognised for her performance.

New Delhi: One of the most sought-after Bhojpuri actresses Rani Chatterjee is a sensation on social media as well. The actress is known for regularly posts stuff on Instagram, keeping her 327k followers updates about the latest happenings about her.

Rani recently took to Instagram to share a throwback picture of herself from her debut film 'Sasura Bada Paisawala'. She wrote a detailed note alongwith the picture thanking her fans and the audience for making the film a huge hit.

"Feeling so happy & proud to share this pic of my first Historic film SASURA BADA PAISAWALA. It has been 17 years & this journey of 17 years went so smooth, feels as is it was just yesterday. I take this opportunity to thanks all the TEAM, who showed their confidence & belief in a school girl & gave me the character of RANI & I THANK with all my love & heart to all my AUDIENCE... Without u all this couldn't have been possible & I thank all the bhojpuri film fraternity & people associated with it," she wrote. 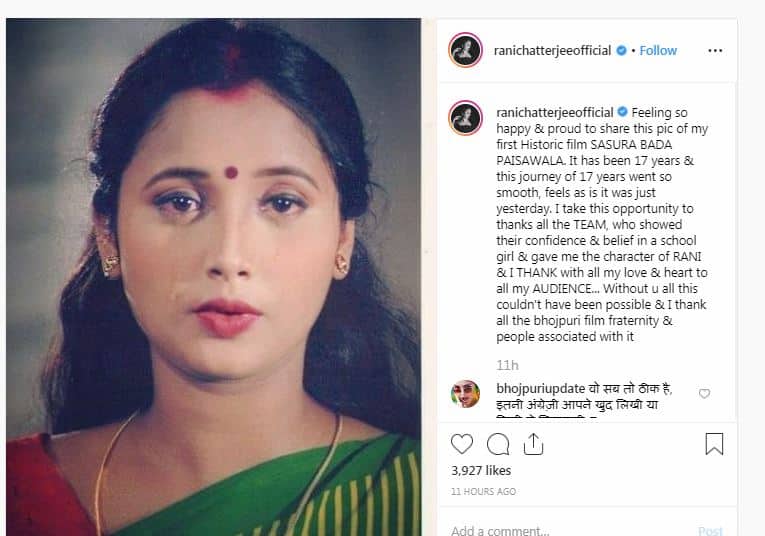 Rani made her debut in 'Sasura Bada Paisawala' opposite superstar turned politician Manoj Tiwari. The film won her accolades and she got recognised for her performance. Ever since there has been no looking back for the actress.

She has so far worked with almost all the bigwigs of the Bhojpuri film industry and a few days back featured on the popular comedy show hosted by Kapil Sharma. She came along with Aamrapali Dubey, Dinesh Lal Yadav 'Nirahua and Khesari Lal Yadav.

Next, she will be seen in 'Chotki Thakurain' which is being helmed by Shams Durrani.