The Bihar floods have affected at least 960,000 people across ten districts in the state and killed ten people. The ten districts that are in the grip of floods are--Sitamarhi, Shivhar, Supaul, Kishanganj, Darbhanga, Muzzafarpur, Gopalganj, East Champaran, West Champaran and Khagadia. 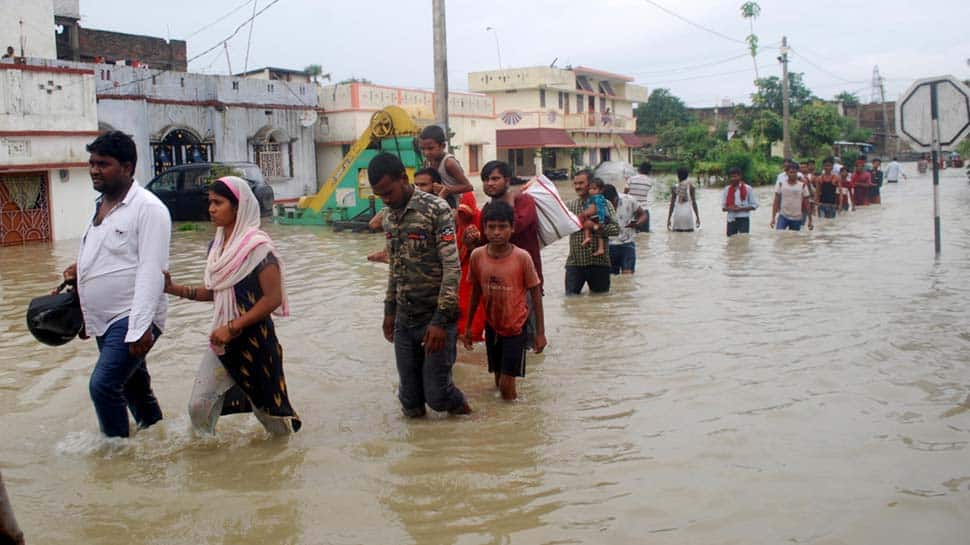 The Bihar floods have affected at least 960,000 people across ten districts in the state and killed ten people. The ten districts that are in the grip of floods are--Sitamarhi, Shivhar, Supaul, Kishanganj, Darbhanga, Muzzafarpur, Gopalganj, East Champaran, West Champaran and Khagadia.

According to news agency PTI, the Gandak river breached the embankment in Devapur village in Barauli block of Saran district and Puraina village of Majha block in Gopalganj district on Friday morning, while another breach took place on the intervening night of Thursday and Friday near Bhawanipur village of East Champaran district. At least 50,000 people of 45 villages in Gopalganj district have been affected by the breach at two places, officials said.

Bihar's Water Resources Minister Sanjay Kumar Jha, who conducted an aerial survey of the flood-hit areas, following a breach in the embankments, said there is no report of any loss of life due to the breach. "It came as a complete surprise for us that breach has occurred at places which have not witnessed any breaches in the past. There is a strong current in the floodwater that has overtopped at several places and put pressure on embankments," Jha told reporters.

There has been a 35 to 40-meter wide breach at the affected sites in the two districts, he said, while stating that the state government has sought Indian Air Force's helicopter for distribution of food packets to people which is expected to arrive on Saturday. The Gandak river turned turbulent, following the discharge of 4,36,500 lakh cusecs of water from Valmikinagar barrage on July 21 due to heavy rainfall on July 19, 20 and 21 in the catchment area of Nepal.

Due to a heavy downpour, 80,000 to 1,00,000 cusecs of water was discharged in the river, Jha said. The Gandak river water has also overtopped National Highway 28 in Gopalganj due to the breaches, disrupting vehicular movement between Gorakhpur in Uttar Pradesh and the districts of Muzaffarpur, East Champaran, West Champaran in Bihar.

The NDRF teams have so far evacuated around 3,200 people and 126 livestock to safer places, Sinha said, adding that they are taking medical teams to the affected places through its boat. The NDRF rescuers are following safety measures and protocols to avoid getting infected by COVID-19 during the flood rescue operations, Sinha said and added that East Champaran District Magistrate Shirsat Kapil Ashok was also present on its rescue boat to personally monitor the entire operation.

Several rivers such as Baghmati, Burhi Gandak, Kamlabalan, Lalbakeya, Adhwara, Khiroi and Mahananda are flowing above the danger level while the Ganga river is flowing below the danger mark at all locations, including two places at Gandhi ghat and Digha ghat in Patna, it said.

The water resources department collects the report of the Ganga's water level from seven places, including Buxar, Bhagalpur, Munger, and two places in Patna. Meanwhile, train services between Darbhanga-Samastipur have been suspended since 7 am Friday due to floodwaters touching the girder bridge near Hayaghat in Darbhanga district, East Central Railway (ECR) CPRO Rajesh Kumar said.