The muscular approach of 2015 has been followed by confidence building in the Northeast, and this could be a viable option to be replicated in Jammu and Kashmir and the LWE-affected states. 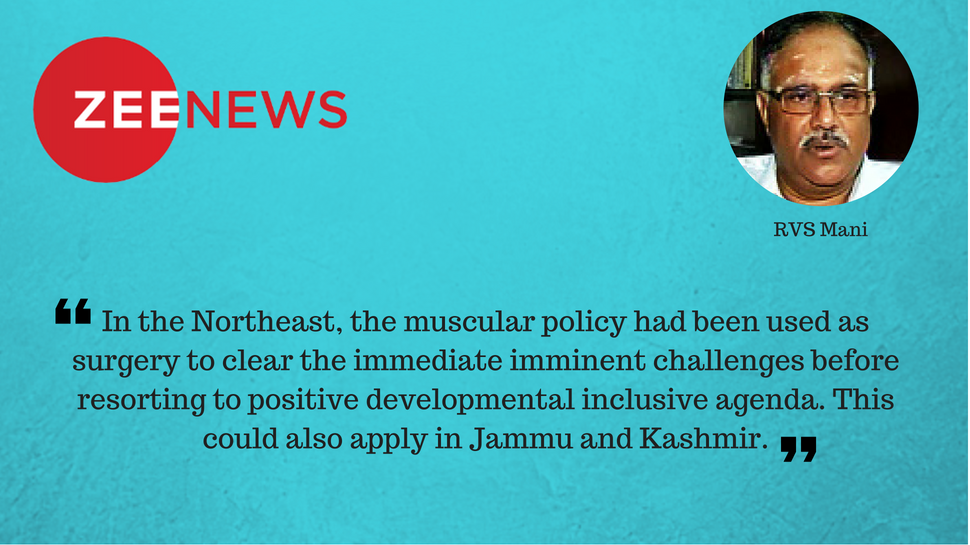 Like Jammu and Kashmir, another part of India that has been plagued by disaffection, alienation and other dysfunctions which had sought the attention of the nation is the seven Northeastern states, with Sikkim being added as a state of the region only in late 1990s. May I also here by recall the respective provisions and special provisions enabled in the Constitution with respect to each state.

Constitutional provisions in brief for each Northeastern state
In so far as Nagaland is concerned, there is a special provision with respect to the state contained in the Article 371A of the Constitution, which inter alia proscribes the Parliament from legislating on any issue having a bearing on religious or social practises of the Nagas, Naga customary law and procedure, administration of civil and criminal justice involving decisions according to Naga customary law and ownership and transfer of land and resources, further that Governor being vested with special responsibility which shall be exercised in consultation with the council of ministers with respect of law and order as long as in his opinion disturbances occurring in the Naga Hills-Tuensang Area immediately prior to formulation of the state or in any part theorto continue and such other special provisions.

Similarly have been provided for the state of Assam under Article 371B, for Manipur under Article 371C for Manipur, 371F for Sikkim, 371G for Mizoram and Article 371H for Arunachal Pradesh. Let us make no mistake that these are special provisions and not temporary provisions as provided in the preamble of Article 370 for Jammu and Kashmir. The objects and reasons for these special provisions are as direct that it is for fundamentally to protect the ethnic heritage of people of the respective states, special mandate to ensure that there is overall and balanced development in both the hilly and other areas of the states (as in the case of Manipur expressly contained in Article 371C mandating the Governor to constitute a special committee of the elected Assembly for the oversight of the hilly areas, etc.

What happened?
Those who have been following the developments in Northeast may be well aware that this part of the country had seen a lot of disturbances through the decades of the 1970s to 1990s. All sort of movements and secessionist groups had been harboured. Whether it is ULFA, the distrust between Kuki Nagas, the NSCN (Issac Muviah) Group, NSCN (Khaplang) group, or still going back the AASU students agitations against infiltration, the TNVs and MNFs, etc. Even till very recently the state of Manipur had seen a lot of disaffection in 2004-2010. Invocation of AFPSA and the image of Irom Sharmila on indefinite fast are still etched in the public memory.

Interestingly in the last four years, we have seen a lot of relative tranquil prevail in the region. How did it happen?

My experience in Northeast in 1990s
I had dealt with matters relating to industrial development of Northeast and other inaccessible areas of the country from 1994-1997. This involved a lot of travel to various parts of Northeast in those days. There many anecdotes which are there for me to share. But an interesting one was when we were travelling from Dimapur to Kohima and in the outskirts of Dimapur, near the Assam Rifles camp, there was a cross firing between security forces and NSCN (IM) members, which was very dominant those days, that we postponed our travel and took shelter in Mt Saramathi Hotel. Notwithstanding, when we did restart our journey, I noticed a lot of graffiti on the stones of huge hills from Naga mothers asking their children to shed violence. It was really catching.

Infrastructure then
The infrastructure in all the seven states was an apology. It would take anything from 6 to 8 hours for a journey from Guwahati Airport to Shillong, and similarly going to Itanagar was quite a challenge. We could never forecast the time it would take from Dibrugarh Airport to Tinsukia to Itanagar. Such was the state of roads. There was rampant unemployment, and disaffection could be seen all over.

Muscular policy when required
The present government did take recourse to muscular approach when the situation demanded. In June 2015, it was under the watch of General Dalbir Singh (retd) as Army Chief that the soldiers of a Para SF unit of the Indian Army, based in the Northeast, had carried out a precise attack on an NSCN (K) camp located inside Myanmar and eliminated at least 60 insurgents in the process. Notwithstanding the muscular policy had been used as surgery to clear the immediate imminent challenges before resorting to positive developmental inclusive agenda.

Recent developments in Northeast
Recently, I had the opportunity to travel to Northeast before I quit my job. I could notice metamorphosis of change. Some outstanding changes have happened. Guwahati Airport to Shillong was just a three-hour drive, that too due to heavy traffic. The time taken to travel to Itanagar also has reduced by several hours which is also of strategic importance because Arunachal Pradesh is a border state.

Reasons for relative peace achieved
Basically, three salient vices were responsible for unrest in Northeastern states. Namely, unrest due to communication and perception gap between the Government of India and the people of the Northeast, lack of infrastructure resulting in denial of social overheads like good roads, healthcare, educational opportunities, water, power, sanitation etc, and thirdly, the issue of livelihood like employment or entrepreneurship.

All three have been addressed to a great extent through this 'Sampark to Samarthan se Samadhan tak' approach of the government. Incidentally, the jumla of 'Sampark se Samarthan tak' has been made public only recently. But unknowingly, three persons in this government have put this process into effect and achieved remarkable successes.

Three proactive ministers in that order
The three persons to whom this success is attributed to are the Mr Kiren Rijiju, the Minster of State for Home, who has been breaking the barriers of communication and perception amongst the masses of the Northeast. Indeed, he has an inherent advantage because, hailing from Northeast, he is trusted by the people of this region. But I have personally interacted with people who have high praise for him.

The second Minister to be credited is Dr Jitender Singh, the Minister of State (PMO), who is also in-charge of the Department of Northeastern Development. This Department has been in existence since the time of the illustrious Arun Shourie. But little did it achieve in spite of this Ministry being headed by a MP from Northeast during the UPA years. Their common refrain in meetings would be to somehow deflect the responsibilities to programme ministries.

The third minister who is to credited for the peace is Ms Smriti Irani, the Minister of Textiles. It is to be acknowledged that in most Northeastern states handloom weaving is an household activity, in addition to their normal family vocations. In Manipur, Mizoram, many districts of Assam, handloom weaving is very common. But they were hard pressed for getting the yarn for weaving because the cotton-producing states are mostly in northern and western parts of the country, and power loom factories with their financial muscle usurp most of the yarn produced. There have been several schemes which the Ministry of Textiles had implemented, including supply of yarn at mill gate prices to handloom weavers. But still there was always a perennial gap in the inventory of household weavers.

Smriti Irani made the same schemes effective. She introduced the 'e-dhaga' platform where weavers including the household weavers in Manipur, Assam and other Northeastern states, can indent their yarn digitally through their mobile phone applications. There is a subsidized yarn quota of 30 kg of cotton yarn and 4 kg of silk yarn for every weaver.

Smriti Irani has also taken quite a few initiatives in the Northeast. She has fostered the silk yarn harnessing both cultivation and reeling in several areas of Assam especially the disturbed district of Kokrajar, and also several places in Tripura and Arunachal Pradesh.

Three apparel and garmenting factories with 100 Juki (Japanese machines) had been set up in seven of the eight Northeastern states to be leased out to local entrepreneurs. In so far as Sikkim is concerned since garmenting is not aligned to their culture and also large parcels of plain land is not available to set up such huge units, units for setting up enterprises akin to the locally available traditional skills have been set up.

I do not say this has resolved all the problems of Northeastern region, but it has mitigated to an extent that disquiet in the region is becoming a thing of past.

Indeed, there are issues related to Mizoram. In spite of huge infrastructure creation in most areas, connectivity in Mizoram is an issue. The route from the airport to Aizwal city is in itself quite challenging to one's back. In addition, there are 17 handloom clusters in Mizoram and some of them due to easy accessibility are still getting acrylic from neighbouring Myanmar and do the weaving. I am sure having flagged it, the Minister of Textiles and her colleagues will address it immediately.

How these lessons apply to Jammu and Kashmir
My idea of detailing these efforts is to take this same approach to Jammu and Kashmir. At some time we may be after cleaning the debris, have to start 'sampark' by talking to people of all three regions of the state, and not just self-styled separatists. Kiren Rijiju is a darling in his communication skills. I am sure he can open the process being appropriately placed in Ministry of Home Affairs and regain the confidence of the people. Later, maybe the success of Northeast can be replicated in Jammu and Kashmir. Maybe this is the time for a more muscular approach a la June 2015-type of breaking the terror training camps in Gilgit, Mirpur Khas and Muzzafarabad.

Can also be replicated in LWE-affected states
Incidentally with the initiative and intervention of Smriti Irani, the a machine known as 'Buniyaad' has been developed by Central Silk Board for replacing the unhygienic practise of thigh reeling, which is most prevalent in Chhattisgarh. The machine reels with higher productivity and yield. Hence, penetration in states affected by Left Wing Extremism (LWE) are also within the realm of possibility.

Will the Narendra Modi government learn from its own success story?