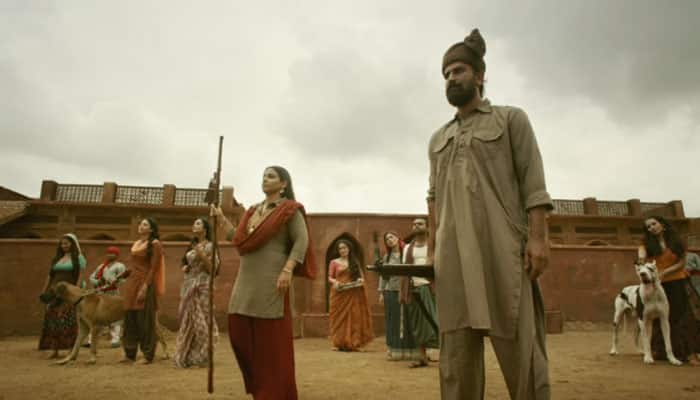 A simple story narrated in a convoluted manner is what sums up "Begum Jaan".

The period drama, layered with historical tales, recounts the tribulations of "Begum Jaan", a brothel keeper whose brothel is situated bang on the Radcliffe line that divides India and Pakistan. This means one half of her brothel lies in India and the other half in Pakistan.

Set in 1947 during the partition of the country, the Begum is asked to relocate. How she fights all odds to save her brothel, forms the crux of the tale.

The premise of the film is akin to the 1983 released Shyam Benegal's "Mandi", starring Shabana Azmi and Smita Patil.

But unlike Benegal's film which was warm and humorous, writer-director Srijit Mukherji's "Begum Jaan", which is a rehash of his 2015 released Bengali film "Rajkahini", has a serious, overdramatic, atmospheric palette.

Connecting the independence era to the current scenario -- where nothing has changed for women, along with humanitarianism, religion, politics and pitfalls of a prostitute's profession, the director salvos from all angles making the story seem solemn and overtly forced.

The pace of the narrative too is askew. The first forty five minutes of the narrative meander and the inciting moment arrives just before the interval. And the latter half is predictable and mundane.

But what keeps you hooked are the fine performances from its ace cast. Vidya Balan in the title role, as expected, is impressive and effortlessly convincing. She makes her presence felt in every frame that she is in. Her, "saali godhi ki laat" while practicing to shoot, draws a chuckle, in her otherwise loud yet solemn personality.

Ila Arun as the amiable Amma is remarkable, with the right amount of drama and restraint in her performance.

While every girl in the brothel has her on screen moments, it is Gauhar Khan as Ruby, Pallavi Sharda as Gulabo, Priyanka Setia as Jameela, Raviza Chauhan as Lata, Mishti as Shabnam and Gracy Goswami as Laadli, who shine.

Pitobash Tripathy as Surjeet and Sumit Nijhawan as Salim, the Begum's handymen, resonate with the right attitude. They carve a niche for themselves in the narrative.

Kohl-eyed and gruff Chunky Pandey as the mercenary Kabir displays a fresh avatar which is impressive, but lacks the wickedness of an antagonist.

The others in supporting roles too are perfectly handpicked and deliver outstanding performances. Notable among them are Vivek Mushran as Masterji - the social worker and Ashish Vidyarthi and Rajit Kapoor as politicians Harshwardan and Ilyas.

Naseeruddin Shah in a guest appearance as Rajaji is wasted.

On the technical front, with good production values, the film is visually distinctive. Gopi Bhagat's cinematography captures the moods, tension and locales with equal fervour. Some of his frames especially the wide angle shots capturing the scenic locale with Ashish Vidyarthi and Rajit Kapoor in the foreground are discerning yet disconcerting.

The background score by Anu Malik elevates the viewing experience. And editing by Monisha R. Baldawa and Vivek Mishra is noteworthy.