Bollywood films to look forward to in 2020 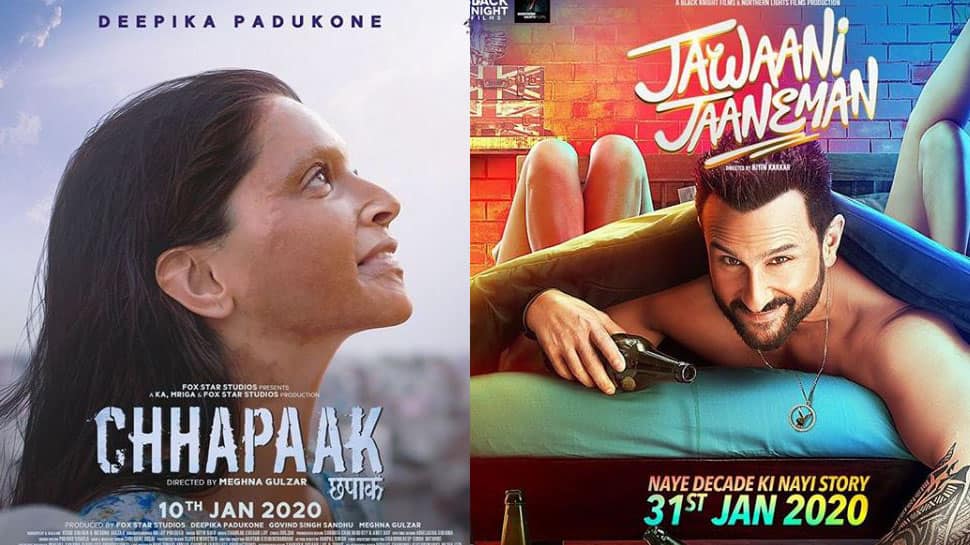 New Delhi: While 2019 wasn't particularly fruitful for Bollywood, the year 2020 promises a lot of interesting films that are slated to release. Although there were many films that had a great run at the Box Office, there wasn't any film that couldn't satiate the soul of a cinemagoer.

However, 2020 promises a lot better set of films in terms of storyline and direction. So here's the complete list of films you should totally look forward to watching in 2020

Rarely do you come across a story where you do not need an entire narration to decide if you want to be a part of a film or not.What is even more rare is to not be able to articulate and put into words what you feel for the film and it’s journey... Chhapaak is all of that and more for me... Presenting the poster of #Chhapaak #AbLadnaHai @meghnagulzar @vikrantmassey87 @_kaproductions @foxstarhindi @mrigafilms

This Deepika Padukone-Vikrant Massey starrer will be the perfect film to kickstart the cinematic year. The film helmed by Meghna Gulzar releases on January 10, 2020. It is based on the life of acid attack survivor Laxmi Agarwal and DP will step into the shoes of Laxmi in the film. The trailer received a thumbs up from the audience and critics, it is also being predicted by one and all that Deepika will bag a National Award for Chhapaak.

After a tear-jerking Chhapaak, Saif Ali Khan will grace the screens with a comedy-drama Jawani Janeman alongside Tabu and the film will mark the debut with Aalia Furniture. Saif will play an 'accidental father' in the film and will be paired opposite Tabu. The popular song 'Ole Ole' will also be recreated in the film. Jawani Janeman will hit the screens on January 31, 2020.

The period drama starring Ajay Devgn, Saif Ali Khan and Kajol will lock horns with Deepika Padukone's Chhapaak on January 10. The film is directed by Om Raut and is produced by Ajay Devgn and Bhushan Kumar.

The Imtiaz Ali helmer is one of the most anticipated films in 2020. It features the rumoured ex-couple Kartik Aaryan and Sara Ali Khan. If rumours are to be trusted, the two fell in love during the shoot of the film and broke up even before the release of the film. However, the two promising actors continue to remain on amicable terms despite their break-up. The film is slated to hit the screens on February 14, 2020.

Starring lovebirds Ranbir Kapoor and Alia Bhatt, Brahmastra was earlier slated to hit the screens in December 2019. However, director Ayan Mukerji postponed the film and now they are eyeing a summer 2020 release. Love blossomed between Ranbir and Alia on the sets of Brahmastra and if all goes well they might take the plunge in 2020. The film also stars Amitabh Bachchan, Mouni Roy in pivotal roles. Several reports also suggested that Shah Rukh Khan might do a cameo in the said film.