The film, directed by Prakash Kovelamudi and produced by Ekta Kapoor's Balaji Telefilms, is all set for release on July 26.

New Delhi: Kangana Ranaut and Rajkummar Rao's upcoming film 'Judgementall Hai Kya' has been slapped with a 15 certificate by the British Board of Film Classification or BBFC. The 15 rating implifies that the film cannot be watched by audience under the age of 15 at theatres. 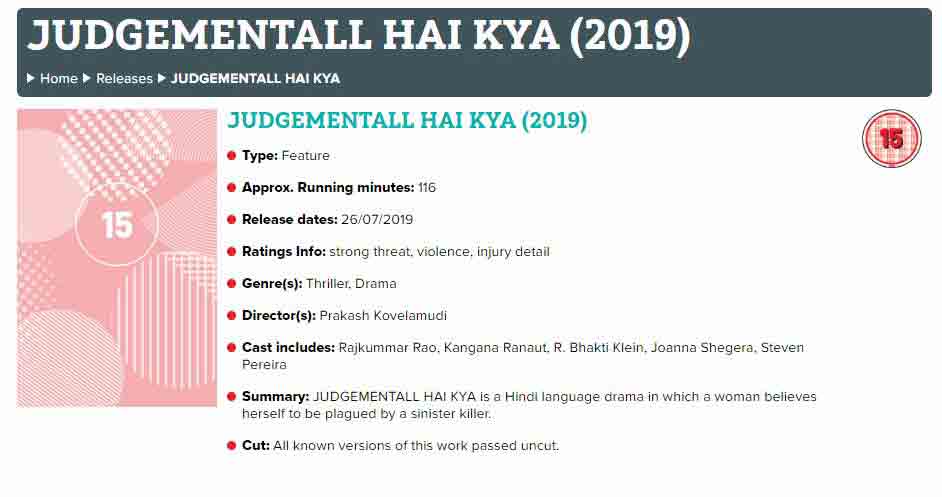 Meanwhile, the first trailer of the film was unveiled by the makers only recently and it has so far between watched over 2.19 crore times. The motion poster and dialogue promo have also left the viewers much intrigued and excited.

Check out the film's trailer below:

'Judgementall Hai Kya' has been backed by Balaji Motion Pictures. The psychological-thriller is produced by Ekta Kapoor and directed by Prakash Kovelamudi. Besides Kangana and Rajkummar, the film also features Amyra Dastur, Hrishitaa Bhatt, Vikrant Massey and Jimmy Sheirgill to name a few.

It marks Kangana and Rajkummar's reunion onscreen after 2014's national-award-winning film 'Queen'. The film is slated for release on July 26, 2019.