The film dives straight into his present life as a chef in the US and merely skims through his early life, including his failed marriage and divorce, without really delving too much into it. 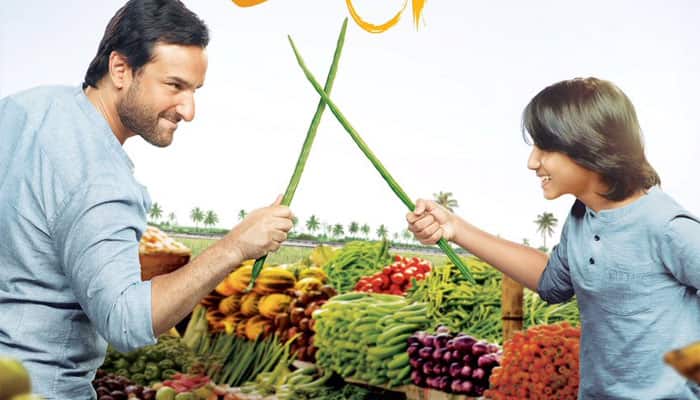 Roshan, who hails from a middle class Chandni Chowk family, is attracted towards cooking from the age of ten and aspires to learn cooking from the 'chole bhature wala chacha' in his neighbourhood and become a chef much to the chagrin of his father who wants him to become an engineer.

How after losing his job at a renowned restaurant in the US, Roshan returns to Cochin to meet his son Armaan (Svar Kamble) who lives with his ex-wife Radha (Padampriya Janakiraman) and realises his priorities and centres his career as a chef around them, is actually the rasion d'etre of the film.

The film dives straight into his present life as a chef in the US and merely skims through his early life, including his failed marriage and divorce, without really delving too much into it. While the first half has a wee bit of emotional drama, the second half is clearly a series of road trips showcasing his new found meaning in life as a chef and how he makes a success of it.

Director Raja Menon extracts natural performances from his actors and that perhaps is the strength of the film as the story is staid and the treatment simple. There is no element of drama or any interesting twists and the narrative flows on an even keel. Humour comes in the form of Saif's comic timing and some witty one liners.

Saif as Chef Roshan Kalra is endearing. He portrays the character in his inimitable style with his attitude and swag to boot. He tries earnestly to look and behave like a chef when in the kitchen. Save some attempts at chopping, or perhaps frying, one does not really get a peek into his cooking skills. His relationship with his son Armaan aka Ari is easily one of the highlights of the film.

Swar Kamble as the young Armaan is confident and essays his character realistically. Padampriya as Radha Menon, his ex-wife, is every inch the independent working professional who has put her past behind her and is yet a friend and well-wisher of her husband.

Milind Soman as Biju, Radha's friend and anchor is competent, while Chandan Roy Sanyal as Nazrul, a junior Chef and devoted to his "guru" Chef Roshan has nothing much to offer, but is sincere.

The music by Raghu Dixit and Amaal Malik is melodious and meshes well with the narrative. "Tere Mere" by Armaan Malik is particularly pleasant.

Cinematographer Priya Seth captures all the places through her lens with utmost candour and sincerity, especially Cochin.

Overall, Chef is a feel-good film about the importance of relationships and the message comes across smoothly albeit garbed in a long-drawn plot.