It gives us a back story of Chulbul tracing his romance of the past, marking the debut of actress Saiee Manjrekar in what seems like an extended cameo and little else. 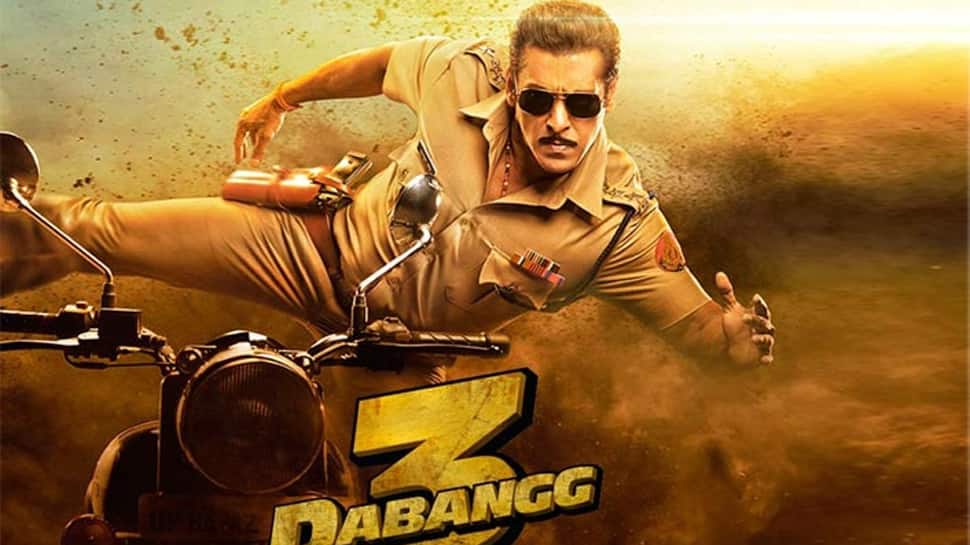 At one level, it is easy reviewing "Dabangg 3". It has everything the hardcore Chulbul fans want, so it's a great film. For them.

For a 160-minute celebration of recycled kitsch that is vying to be the year's biggest blockbuster, simply pleasing Salman Khan's hardcore fan base may not be enough -- especially when there is a killing to be made in the Christmas season against a rumoured 90-crore budget. So, "Dabangg 3 opens well beyond the superstar's familiar turf, in three languages -– Tamil, Telugu, and Kannada -- besides the original Hindi version.

That last bit is important to understand how saleability quotient drives the efforts of the makers to craft a commercially profitable product rather than mainstream cinema with some amount of originality. This is Salman's show all the way, but the villain is a Kannada superstar (Kichcha Sudeep). Calling the shots is Prabhudeva, actor-filmmaker who holds considerable sway in Tamil and Telugu markets. As Bollywood's mightiest Khan goes down South to explore fresh box office, this new sequel tries rehashing the trademark "Dabangg" spirit that has always revealed a massive hangover of the vintage Madras Cut movie.

This time, Salman and company show us Chulbul Pandey's life before the first film, pushing a prequel text of sorts in the first half before tying the loose ends in the second. It gives us a back story of Chulbul tracing his romance of the past, marking the debut of actress Saiee Manjrekar in what seems like an extended cameo and little else.

Having Salman romance a much-younger Saiee looks like a mere ploy to let him revisit all that worked in the first "Dabangg". The chemistry for one -– across those smalltown marketplace sets in the song "Naina lade" -– would hark back to what he did with Sonakshi Sinha's Rajjo in the first film (remember "Tere mast mast do nain"?). Much of the rom-com situations between Salman and Saiee, as well as the melodrama, are also repeats of winning scenes we have seen before.

Long before the film hits intermission mark, you realise this truth: The instruction given to Prabhudeva was obviously clear -– churn out a sequel that's a rerun of the first two films, in terms of romance, violence, humour and drama peddled. It has to be bigger and glossier, if not as stylish.

The "Dabangg" flicks follow a classic narrative structure of commercial Indian cinema. The hero, an invincible do-gooder, after initial mooning about with the heroine (and a possible minor build-up conflict with the villain), will prepare for a second half that is heavy with action and retribution. Chulbul's adventure in this film does not waver.

The film, incidentally written by Salman, retains every formula, as Chulbul's enmity with bad man Balli Singh (Sudeep) finds it roots in the back story of the first half, before being resolved by the hero with typical violent elan in the climax.

Given that most of what happens just seems to be an amped-up repeat of the past two films, Salman must be hoping the seven-year gap between the last film and this one has whetted audience appetite -- that fans are game to watch familiar Chulbul Pandey antics all over again.

To be fair, Salman is in his elements, and that's what wholly drives this film. If Bollywood ever had a comic action hero worth his smoking barrels, it has to be the maverick Chulbul Pandey. With "Dabangg 3", the superstar is clearly trying to raise Chulbul's stature as an invincible superhero a few notches higher. He is a natural winner in the fight sequences (personally, I felt the action scenes were Chulbul's highlights in the film). He clearly continues to relish spewing those witty oneliners, too. But he looks fatigued in the drama and romance scenes.

Salman's flamboyance as Chulbul the supercop, however, fails to hide the fact that you are essentially paying to watch the same film for the third time. Hardcore fans may not complain, because Chulbul Pandey's world is still woven around their hero.

You feel sorry for poor Rajjo, though. In a film where various sharp objects play a major role in the killings, the only action Sonakshi Sinha gets with a knife is chopping vegetables in the kitchen.

Rani Mukerji: My character in 'Mardaani 2' stands for women's empowerment