'Dil Bechara' movie review: Sushant Singh Rajput teaches Sanjana Sanghi and us how to live life to the fullest

'Dil Bechara' movie review: You'll be emotional, but watch it for Sushant Singh Rajput. He hits the right chord. 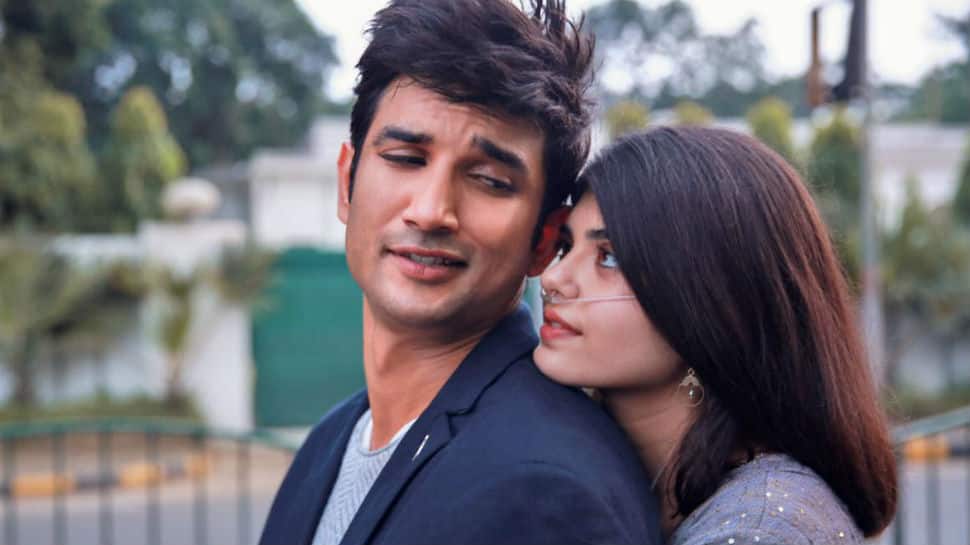 How do we begin it? Was this how we had ever thought we would watch Sushant Singh Rajput? With tears in our eyes and smile on our faces. No, never. Let us all admit it was difficult for us to watch 'Dil Bechara' - but at the same time, we couldn't think of missing it, right? 'Dil Bechara' premiered today on Disney+ Hotstar. It is Sushant's last film and as a tribute to all his fans, the makers of the movie decided to release it on the OTT platform for subscribers as well as non-subscribers.

Now, talking about 'Dil Bechara'. It stars debutante Sanjana Sanghi opposite Sushant. The film is set in the beautiful lanes of Jamshedpur and a part has been beautifully shot in Paris. Sanjana stars as Kizie Basu, a young girl suffering from thyroid cancer. Actors Swastika Mukherjee and Saswata Chatterjee play her parents in the film. Kizie has no hopes from life and thinks there can never be a happy ending to any love story.

Manny is full of life, has a positive approach to life, ever-smiling. However, no one knows the pain behind that smiling face. He had osteosarcoma and hence, his left leg had to be amputated. However, Manny keeps smiling and does not let anyone know of his pain.

Manny enters Kizie's life as a blessing. She hated him initially, but then, all love stories begin like this. Don't they? Kizie eventually falls in love with Manny and why not? He is charming, a happy-go-lucky guy and most importantly, he keeps her happy.

Manny has a friend in Sahil Vaid aka JP. JP dreams of making a Bhojpuri movie (he hails from Bihar) and Manny is his hero. The dream project has to be completed within a short span of time as JP deals with an eye problem. He has no vision in his left eye and after an operation, he would be visually impaired. Manny asks Kizie to become the heroine in JP's film - 'Rajini Awat Hai Sabke Jalawat Hai' - and she agrees.

Manny shoots for the film in his idol Rajinikanth's style and Kizie helps him. In between, JP loses his eyesight after the operation, but this doesn't deter them from shooting their film and living their lives as Manny was beside him.

As they meet up regularly, Kizie and Manny fall in love with each other. Their love story is beautiful and heartwarming.

Kizie, meanwhile, is in search of her favourite singer Abhimanyuveer. It's her wish to meet him, but she doesn't know where he is. She asks Manny to hear his song. He is initially reluctant but as the days pass by, he listens to Abhimanyuveer's song and falls in love with it, but notices that the track is incomplete. Kizie and Manny discuss the incomplete track and he makes sure she meets him. He motivates her to make her dream come true and she takes a step forward. Kizie writes to Abhimanyuveer and soon, he responds to her in kind. And, that's how they come to know he is in Paris.

Kizie decides to go to Paris. Her parents and doctor oppose to her plan and in between, her health deteriorates. Days later, by Manny's support, Kizie goes to Paris along with him and her mother. She lives her life to the fullest in Paris with Manny and also meets Abhimanyuveer - played by Saif Ali Khan. However, her idol is not how she had thought him to be. Kizie and Manny feel totally dejected by his idea of life and the meeting ends on a dramatic note. Hence, Manny decides to complete the song for Kizie.

It is in Paris that they come close and Kizie decides to propose to Manny. While she proposes to him, Manny reveals his cancer has relapsed. Then, Kizie helps him lead his life. She motivates him to enjoy life, motivates him to complete what they left in the middle - JP's film and together, they shoot it.

As the days pass by, Manny and Kizie come more closer, but as she believed no love story has a happy ending, the same happened - Manny dies. He leaves Kizie with his beautiful memories and the mantra to lead life.

That's the story of 'Dil Bechara'.

Director Mukesh Chhabra has made the film will love. AR Rahman's music has made struck a chord with everyone. We are all hearts for Sanjana and her performance and what can we say about Sushant - he was a rare star and will always be. His screen presence and smile will always light up our screens.

'Dil Bechara', a remake of 'The Fault In Our Stars', is full of life and Sushant teaches us how to live life.

Yes, the pain is unbearable. You'll be emotional, but watch it for Sushant and hence, a rating for 'Dil Bechara' won't do justice to the film and the shooting star.

We miss you, Sushant.