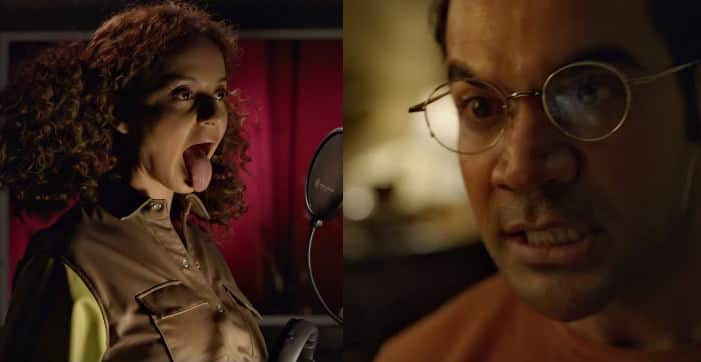 "Ab raavan sita ko nahi, sita raavan ko dhundegi, " ages ago Valmiki crafted a character Sita, that was chased by the beastly Ravana. But many years later in Prakash Kovelamudi's Judgementall Hai Kya,  the tables have turned and the beast himself is chased by Kangana Ranaut's Bobby, who like Sita goes through a rigorous 'agnipariksha' in order to hunt for the Ravana that has only changed its forms through the years.

Kangana Ranaut as Bobby is a byproduct of her traumatic and unresolved childhood. Her indifference to everything seemingly perfect in an imperfect world is termed 'acute psychosis' by the psychiatrists and 'pagal' by the rest of the world. Bobby carries multitude in her head, she lives through various identities. Her eerily blunt answers to the simplest questions baffle the people around her but they don't try to delve much into her character as they have already branded her in their minds. Her dark humour and flashy sense of style ostracises her from the crowd that is "normal" and her fixation with cockroaches is being dealt with medication that she hardly consumes.

When Bobby is first introduced to the audience, she appears in an upside-down posture, pretty symbolic to her journey in the film. Everything that she does is a result of her traumatic past, she chooses a three-month asylum over Rs 20,000 fine. She makes origami out of news clippings of gruesome incidents like rape, domestic violence and murder. Unmindfully untangling the danger that lies ahead of her.

Bobbly gets a new subject to obsess over when her new tenants Rajkummar Rao as Keshav and Amyra Dastur as Rima walk in. Keshav's demeanor is not well-received by Bobby, who always keeps an eye on his activities. Keshav and Rima's whirlwind romance is too good to be true for Bobby, who is unnerved by the perfection that their relationship tries to project. Just when she tries to unmask the miss goody two shoes, a murder turns her life topsy-turvy.

While everything that Bobby claimed was a fragment of her imagination, was Keshav the real murderer or was she cooking yet another fable in her head?

Prakash Kovelamudi's narrative will play mind games with you, it will absorb you completely and drive you to the point of no return. Bobby's struggle will choke you, disrupt your mental peace and raise innumerable questions. However, despite all the sufferings, you would not able to take your eyes off the screen because every scene is a precursor to something humungous.

The first half of the film is riveting, grueling and a perfect blend of suspense and horror while the second half is a bit overdone. There is too much cruelty and not-so-soothing scenes that will welcome you after the interval. However, Kangana and Rajkummar's impeccable performances make up for all the shortcomings.

Rajkummar as Keshav/ Shravan is one of the most complex characters crafted in the recent past. He is so subtle about what he is and what he wants the people to assume about him. Rao slips into his character with finesse and adds yet another feather to his glorious hat. His dialogue "Kon hai sabse bada psycho, tu ya main?" will resound in your ears even when you exit the theatre. Incidentally, the film pretty much hovers over this one dialogue by Keshav. Every little thing which you might not take seriously is significant in how the film shapes up.

Raj's rugged looks in the film might hold your gaze for a while but his character can scar you for a lifetime. But is it just how he seems or is he a product of Bobby's imagination?

Kanika Dhillon, the screenwriter of the film has written some extremely thought-provoking dialogues that might sound frivolous but has a deep meaning if you delve into it. The undertone of Ramayana adds flavour to the rich script and flawless cinematography.

Prakash Kovelamudi's Bollywood debut is worth all the adulation and it goes without saying that Kangana and Rajkummar's performance has truly made the film that it has turned out to be. Go for it folks and let yourself immerse in never-seen-before suspense and horror drama.