The 'Pyaar Ka Punchnama' actor is currently in Lucknow shooting for the upcoming movie where he will be seen sharing screen space with Ananya Panday and Bhumi Pednekar.

In the still, the actor is seen sweating it out with kids while playing football. He shared the BTS photograph on his Instagram story, captioned, "Set pe mehnat, wid d kids."

The 'Pyaar Ka Punchnama' actor is currently in Lucknow shooting for the upcoming movie where he will be seen sharing screen space with Ananya Panday and Bhumi Pednekar.

He is essaying the role of Chintu Tyagi, a geeky man with a retro-style moustache. While sharing the look on the picture-sharing platform, the 28-year old called it "perk of being an actor" that he gets to "live so many lives in one life." 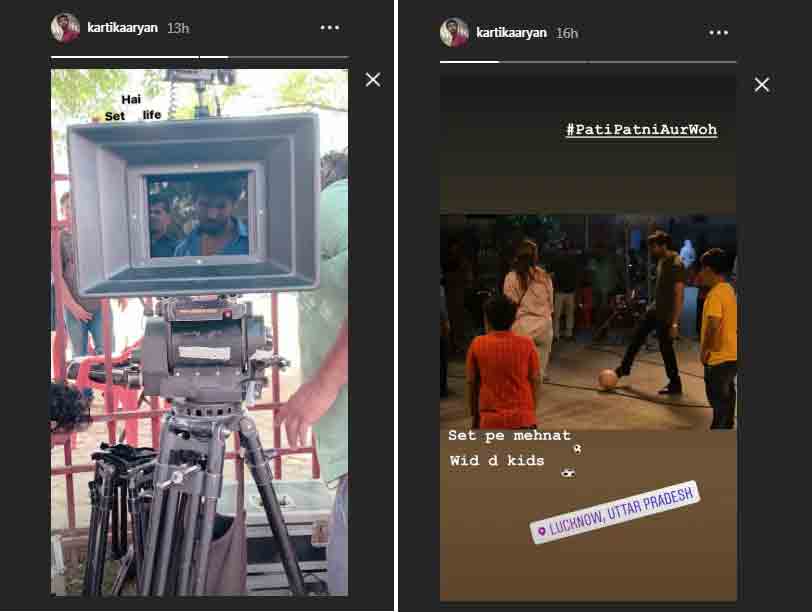 The picture is such that he looks like a government official as he is seen sitting in the backdrop of an office with a pile of files.

The film is an adaptation of the 1978 drama of the same name, which featured Sanjeev Kumar, Vidya Sinha and Ranjeeta Kaur in the lead roles. The original film revolved around a married couple Ranjeet (Sanjeev) and Sharda (Vidya) and how things change after he gets involved with his secretary Nirmala (Ranjeeta).

The upcoming film is slated to release on December 6, this year.

Apart from the Mudassar Aziz directorial, Kartik will also be seen in Imtiaz Ali's next alongside Sara Ali Khan.