For Akshay Kumar, this is a very different nationalist hero. 'Mission Mangal' is a feel-good toast girl power, and the fact is an advantage for its female cast. Vidya Balan, Sonakshi Sinha, Taapsee Pannu, Kirti Kulhari and Nithya Menen get well-crafted roles that fit seamlessly to give the film its multi-starrer entirety. 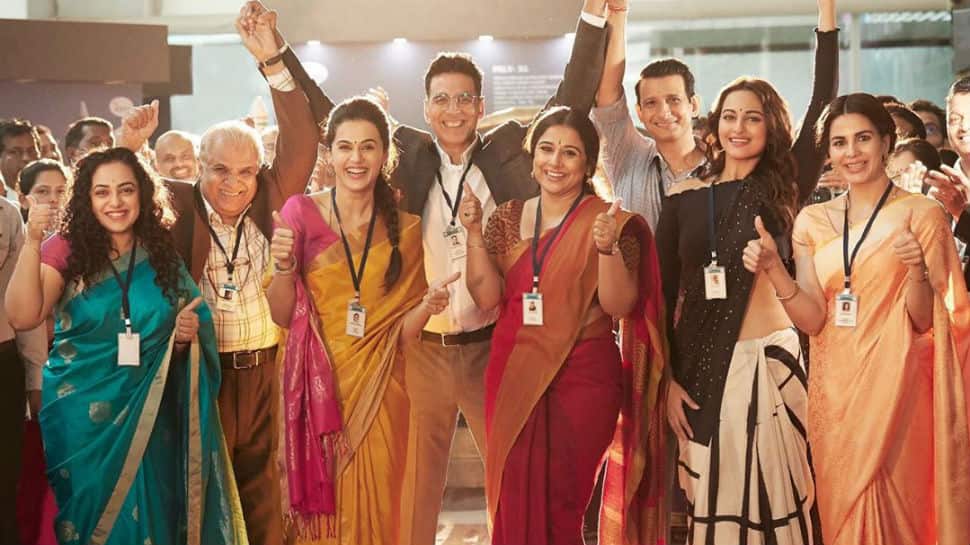 Going to Mars is about as much of a challenge as chomping on a Mars chocolate bar -- at least, that's the impression 'Mission Mangal' gives you. Akshay Kumar's latest ode to the nation prioritises the need to match the feel-good spirit of an extended holiday weekend, so much so it misses out on setting up the drama and thrill of a scientific feat that is nothing short of historic for India.

'Mission Mangal' packs in essential masala. There is a pleasant undercurrent of humour all along. Director Jagan Shakti and his battery of co-screenwriters (R Balki, Nidhi Singh Dharma and Saketh Kondiparthi) sets up smaller subplots of melodrama within the basic storyline to describe the personal lives of its protagonists -- in rather unnecessary detail. For the lack of a genuine antagonist in the real-life sage it is based on, the script invents a 'villain' too -- by way of Dalip Tahil's NASA-returned Indian expert at ISRO, who sneers and snarls at every 'desi' effort by Akshay Kumar and team to do something original without foreign aid.

Notably, for a film that narrates a national achievement, 'Mission Mangal' is lower on the jingoism quotient than many of Akshay's past odes to the nation. Of course, there is a line by our hero advocating why Make In India matter in ISRO's scheme of things, but the idea is kept to a minimum.

Director Jagan Shakti maintains pace through most of the first half, as the story begins at a point where an ambitious ISRO project goes kaput. Rakesh Dhawan (Akshay Kumar), a maverick genius scientist who was in charge of the project, takes blame, although it was project director Tara Shinde (Vidya Balan) who was actually at fault.

Following the failure, Rakesh is shunted to a project no one believes will ever take off -- in a country that was still struggling at that point to send a rocket to moon, Rakesh is asked to head India's mission to Mars. Only, despite the odds stacked up against the project, Tara is confident that Mars may not be a distant dream, after all. She manages to convince Rakesh the project could actually take off, with the right team and execution.

That build-up portion of the script intertwines personal lives of Tara and her team with the account of the mission itself. So, Eka Gandhi, the propulsion control expert (Sonakshi Sinha), starts off as a youngster who hates most things Indian and looks for the first chance to get away to NASA. Spacecraft anatomy designer Neha Siddiqui (Kirti Kulhari) is fighting social ostracism owing to her minority status. The navigation expert Krittika Agarwal (Taapsee Pannu) must, as a devoted wife, tend to her army man husband when he is injured in the line of duty. Varsha Pillai (Nithya Menen), the satellite designer, battles her mother-in-law's taunts at home for not being able to bear a child. Tara herself has her days full, balancing career, home, husband and two teenage kids.

Too much footage is allotted to each of these sub-stories, which distracts from what the film was essentially supposed to be a gripping drama of an overwhelming achievement. ISRO's Mars Orbiter Mission (MOM) was accomplished in record time, using minimal funds and skeletal infrastructure. It had to be realised in one attempt, as the reluctant space organisation was not too keen to shell out any more funds for the project. The gravity of such an achievement never really comes across.

To their credit, Jagan Shakti and his co-writers have managed to keep the narrative lucid despite the fact that they were dealing with a storyline that is heavily technical. The cinematography and special effects are functional, though a lot of the melodrama could have been edited.

For Akshay Kumar, this is a very different nationalist hero. For a change, he is only a catalyst to the epic achievement. Despite enjoying maximum footage, Akshay is actually letting the female protagonists push the plot. In fact, it is interesting to note how, in a particular Metro Rail sequence when he is tipsy after a pub-hopping spree, the macho Rakesh is protected from a bunch of ruffians by the gang of girls.

'Mission Mangal' is a feel-good toast girl power, and the fact is an advantage for its female cast. Vidya Balan, Sonakshi Sinha, Taapsee Pannu, Kirti Kulhari and Nithya Menen get well-crafted roles that fit seamlessly to give the film its multi-starrer entirety.

Sharman Joshi and veteran National Award-winning Kannada actor HG Dattatreya complete the team of scientists who made MOM possible. They get the odd scene to shine, providing able support to the lead cast.

The cast overall remains a big draw in a film that somehow becomes mediocre somewhere down its runtime, despite its subject. 'Mission Mangal' ends up an ordinary film about an extraordinary feat.