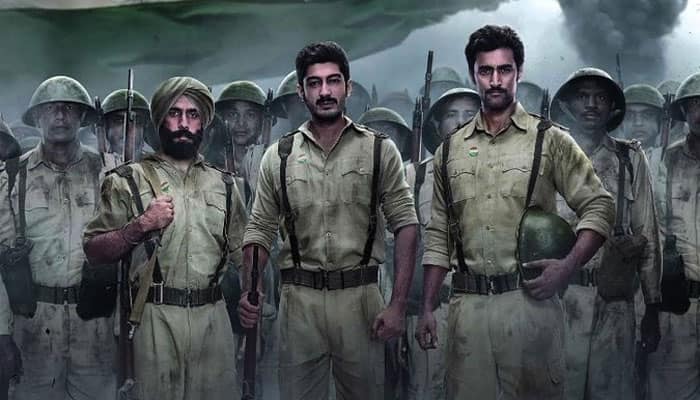 A historic period film by director Tigmanshu Dhulia, one goes expecting a lot out of ‘Raagdesh’, but unfortunately, this film -- steeped in facts and robust performances -- fails to make an impact owing to its slow pace and tedious narrative.

It is a tale about three Indian National Army (INA) soldiers -- Captain Shah Nawaz Khan (Kunal Kapoor), Captain Gurbaksh Dhillon (Amit Sadh) and Captain PK Sahgal (Mohit Marwah) -- who are court martialled and their subsequent trial at the Red Fort. The film is set in 1945, when they join Netaji Subhas Bose's Azad Hind Fauj to liberate India from the British and fight the war in Burma.

The film is packed with facts and well-researched. Be it the war scenes or the court room drama, the sepia tones, languages spoken, get-up of the characters, are all precise and honestly portrayed, but somewhere, the film suffers from information overload causing fatigue to set in for the viewer. It is interesting, but not engrossing. Completely devoid of entertainment, it has a limited appeal for lovers of history only. In parts, it also appears to be an underlying propaganda film.

The screenplay, which recourses to flashback while in the courtroom, apprising viewers with what happened at the war front in Burma, is a tad lengthy and confusing as one loses the thread.

On the performance front, all the three lead actors render realistic performances -- right from their body language to their diction, conveying their patriotism and emotional struggle with conviction. Amit Sadh, however, shines as the feisty and dauntless, Gurbaksh Dhillon.

Mohit Marwah too makes an impact with his strong portrayal of a brave soldier and a gentle lover. Mrudula Murali, a southern actor, in her debut Hindi film as Captain Lakshmi is effervescent and has a striking screen presence. She essays her character with realism and takes it a few notches above the script.

Kenneth Desai as lawyer Bhulabhai Desai, who defends the trio, is eloquent and powerful in the courtroom scenes. Kanwaljit Singh as PK Sahgal's distraught father is his usual self but charismatic. Kenny Basumatary is every inch Bose in his physical demeanour and oratory, making the character come alive on screen.

The film expectedly boasts of good production values and takes you into that period effortlessly. Cinematographer Rishi Punjabi captures the war scenes through his lens with exactness and succeeds in repulsing the viewer with the raw bloodshed and gore.

The music helps in creating the mood and ‘Hawaaon mein woh aag hai’ is soulful, and of course ‘Kadam kadam badhaye ja’ is skilfully used to stir patriotism.

Overall, this film although well-made, fails to evoke patriotism and obviously does not even attempt to entertain.