`Sanju`, headlined by Ranbir Kapoor, was a massive success at the box office as it managed to rake in Rs 341.22 crore.

New Delhi: As the highly appreciated biopic `Sanju` clocked one year of its release, Bollywood`s heartthrob Vicky Kaushal shared a post to celebrate the occasion.

The `Uri: The Surgical Strike` actor shared the poster of the film on his Instagram stories where he showed up his closeness with the fictitious character Kamlesh Kanhaiyalal Kapasi alias Kamli and how people appreciated his work in the film.

"1 year. The first time I heard people calling me by the name of my character. Thank you for all the love! It means a lot to me, #Sanju," he captioned the poster in the story. 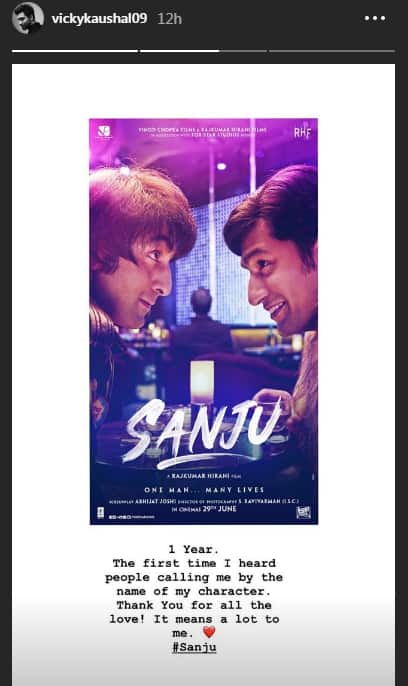 The story of the film tracks down the of Bollywood actor Sanjay Dutt (played by Ranbir Kapoor), his addiction with drugs, arrest for alleged association with the 1993 Bombay bombings, relationship with his father, comeback in the industry, the eventual drop of charges from Bombay blasts, and release after completing his jail term.

The film was considered one of the best films of the modern era.

`Sanju` was a massive success at the box office as it managed to rake in Rs 341.22 crore.

Meanwhile, on the work front, Vicky will be seen next in films like period drama `Takht,` `Bhoot Part One - The Haunted Ship,` and untitled film where he will be seen as Field Marshal Sam Manekshaw, helmed by Meghna Gulzar.