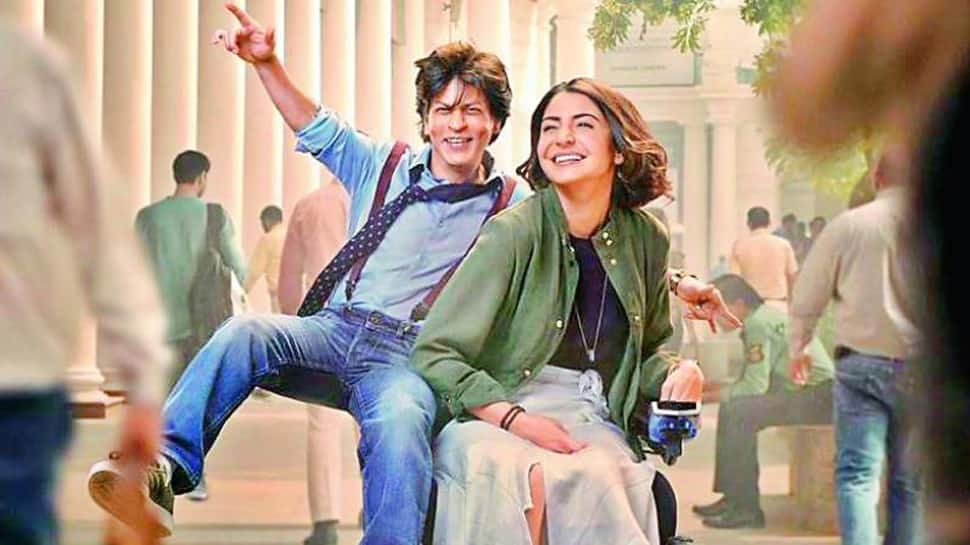 New Delhi: In an attempt to stand out from the crowd, we often take the road-less-traveled without realizing where the road will actually take us. Director Anand L Rai with a vision to treat his audience with something that they have never seen before ends up making a completely outlandish film "Zero".

The film opens with a presumptuous 38-year-old vertically challenged Bauua Singh (Shah Rukh Khan) daydreaming about playing a hero to a girl held hostage by his father Ashok (Tigmanshu Dhulia) who he consciously and sub-consciously considers a villain in his life. He even holds his father responsible for his short height. The father too doesn't feel any differently and constantly ridicules his condition. Tigmanshu Dhulia the actor has outshined Tigmanshu Dhulia, the director in the film.

Bauua's character has been designed articulately and with great care. Despite emulating a deformity on the screen, the character doesn't feel sorry for himself or uses it as a cause for not being able to do things that are done by other people. Bollywood has a habit of using every specially-abled character to induce sorrow but no cliched treatment has been given to Shah Rukh's character in the film. He neither asks for sympathy nor gives anyone a chance to remember him as a man in distress. However, the forced-comedy has the ability to disrupt the mental peace of any sane person.

Keeping his flawed sense of humor intact, Bauua jumps and jiggles through the streets and ghettos of Meerut along with his friend Zeeshan Ayyub till he lands at the office of a matrimonial website in a hope to find a suitable match. That's when the supremely intelligent Anushka Sharma as Aafia Bhinder wheels through science and logic and enters the scene. She falls in love with a scientifically-challenged Bauua only to be left alone on her wedding day. The 'runaway husband' Bauua escapes the shambles of marriage for an actress Babita Kumari leaving Aafia heartbroken.

Anushka Sharma as Aafia has proved that there is isn't anything that she cannot do. After playing a simpleton in Sui Dhaaga, Anushka in Zero has proved that whichever zone she enters, she turns it into her comfort zone.  For a major section of the audience, it was slightly difficult to absorb the mannerisms of a person suffering from cerebral palsy but Anushka through her character brought forth the concerns of people who are born with that condition without any biases. She got into the skin of the character and held it till the very end something the actors miss doing especially while essaying a specially-abled character.

In another logic-defying turn, Bauua meets his favorite actress Babita Kumari (Katrina Kaif) who kisses him on their first meeting. This, however, reminds us of the saying that certain things happen only in movies. For a writer like Himanshu Sharma, who has penned a cinematic-gem like Tanu Weds Manu, scenes with such low-relevance are completely unexpected.

Katrina Kaif who plays Babita Singh a superstar brings forth the ugly side of stardom, something the audience is not oblivious to. She makes the most un-starry entry with her hair ruffled, kohl-smeared all over her face, tears brimming out of her eyes. Her character is in her post-break-up phase and hence finds solace in the arms of her bottle of vodka. She uses Bauua Singh as a prop to dishevel herself from the reality of her life, only to kick him out later.

Katrina who has had a small part to play in the film has delivered her career-best performance in Zero. Her struggles to deal with a break-up bore an uncanny resemblance to her personal life. She has never been so real in any of her films and in Zero, it almost felt like she did not attempt to be anything but herself.  The short-lived union of Bauua and Babita proved to be a bane for Aafia, who was nursing her broken heart and a child born of out of love-lock.

In an attempt to re-unite Aafia and Bauua, the storyline jets off to NASA. The space sequel proves to be the biggest loophole in the film. It is so far from reality that no amount of gravitational force can pull it back.

Bauua's journey from Meerut to Mars was designed to give the perfect closure to a story that lacks clarity. However, the emotional end made up for the damage it had caused in the past.

The film also has some delightful moments where the B-town beauties take us through the star-studded parties. Alia Bhatt, Karisma Kapoor, Deepika Padukone, Juhi Chawla, Kajol along with late actress Sridevi add a tinge of glamour to an otherwise dim-witted film. A chimpanzee too has delivered an impactful performance.

Although the director Anand L Rai has had a glorious history, he has failed in executing the film. However, one thing that the whole team can be certainly proud of is the performances.  The whole star-cast has delivered their career-best performance in Zero and shouldered a delirious script.