Gold glitters on Dhanteras despite high prices, sales up 15%

Gold and jewellery sales are expected to have gone up by up to 15 per cent on the auspicious occasion of 'Dhanteras' Monday as consumer demand revived on reports of further jump in the yellow metal rates in the coming weeks. 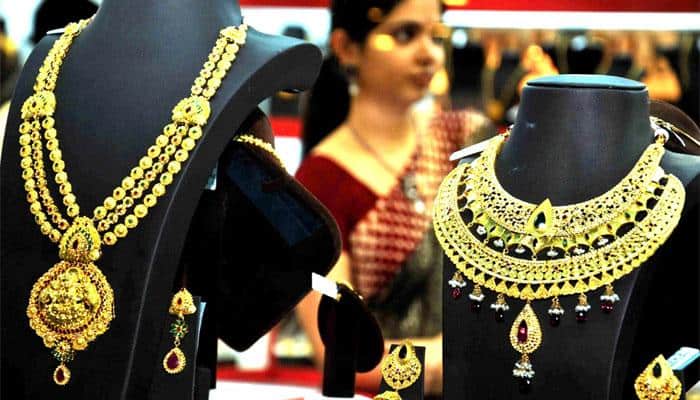 Gold and jewellery sales are expected to have gone up by up to 15 per cent on the auspicious occasion of 'Dhanteras' Monday as consumer demand revived on reports of further jump in the yellow metal rates in the coming weeks.

The buying during the morning trade remained subdued, but it picked up later as eager shoppers indulged in token buying, while some took delivery of their wedding jewellery. There was more demand for coins compared to jewellery.

Even organised players like P C Jewellers and Kalyan Jewellers are expected to have seen better sales as quality and better designs at competitive prices attracted more footfalls.

Unorganised jewellery players in India -- the world's second biggest buyer of the precious metal -- make up for roughly 70 per cent of the country's gold sales.

Dhanteras is considered to be an auspicious day for buying gold, silver and other valuables and is largely celebrated in northern and western parts of India. The buying continues till late night.

"Consumer demand has revived on reports of further increase in gold rates up to Rs 35,000-40,000 per ten gram in the coming weeks due to weak rupee. We estimate sales to be higher by up to 10 per cent than the year-ago," All India Gem and Jewellery Domestic Council (GJC) Chairman Nitin Khandelwal.

Among organised players, P C Jewellers Managing Director Balram Garg said, "We are seeing 10 per cent growth in volumes and 15-18 per cent in value terms compared to last Dhanteras."

There was demand for both gold and diamond jewellery at its 95 stores spread across the country, he added.

Kerala-based Kalyan Jewellers Chairman and Managing Director TS Kalyanaraman said, "We have seen positive momentum this Dhanteras and are expecting 8-9 per cent increase in revenue over last year based on early data."

The key contributors for this increase is the steady shift of clientele from unorganised to organised players like Kalyan, he said. The jewellers operates 100 stores in India.

"We are seeing growth all across our stores. Footfalls are gaining momentum from late afternoon. We are expecting better sales and a healthy double digit growth," Titan Company Senior Vice President (retail and marketing jewellery division) Sandeep Khulhalli said.

As gold prices are ruling high, the demand is more for small to medium size jewellery, especially finger rings, earrings, bangles among others, he added.

Echoing a similar trend, WHP Jewellers Director Aditya Pethe said that the company has met the expected sale target with 10-20 per cent growth in footfall, while Anmol Jewellers founder Ishu Datwani said he sees 15-20 per cent jump in sales on the Dhanteras day.

Stating that there was surge in gold and silver coins despite liquidity crunch and high prices, Kundan Group Director Vidit Garg said the company sees its coin sales to double this time from 75,000 pieces sold in the year-ago.

The city-based Khanna Gems Pvt Ltd Managing Director Pankaj Khanna said the company has got into the bullion business this year and sold 20 kg of silver coins Monday. The sales were better than expectations.

Appreciating gold price is also prompting costumers to opt for gold, he added.

However, gold refiner MMTC-PAMP India Managing Director Rajesh Khosla said that market was subdued as there was a general reluctance to enter the market. "Much of our demand for coins is from corporate this time."