This is Tim Cook's maidan visit to India and will be here for five days during which he will also meet Prime Minister Narendra Modi, inaugurate a development centre in Hyderabad among others. 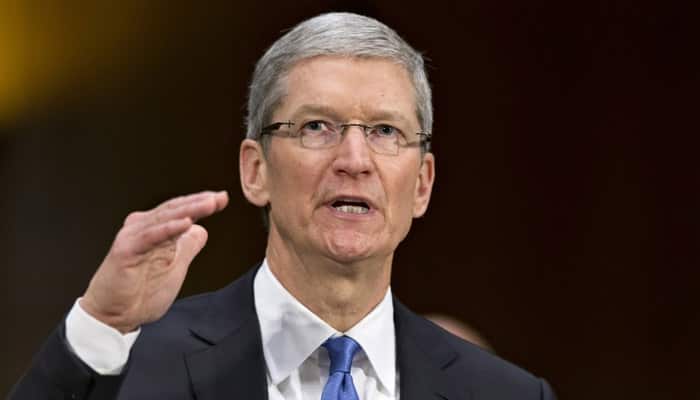 New Delhi: It was an exciting first day for Apple CEO Tim Cook on Wednesday as he met with honchos of India Inc, leading bankers and the Bollywood royalty.

This is Tim Cook's maidan visit to India and will be here for five days during which he will also meet Prime Minister Narendra Modi, inaugurate a development centre in Hyderabad among others.

The Apple CEO, who landed in the city late Tuesday night on a private jet from Beijing and is staying in a large suite at the iconic Taj Mahal Palace, began his India sojourn on a religious note by paying a visit to the famed Siddhivinayak Temple in the heart of the mega-polis.

At the Siddhivinayak Temple, located at Prabhadevi area of south Central Mumbai, he also chanced up on Mukesh Ambani's elder son Anant Ambani.

He also held a meeting with ICICI Bank chief Chanda Kochhar at the bank's headquarters.

As per reports, Cook walked-in into the ICICI Bank Towers in the Bandra Kurla Complex business district and spent over an hour at the bank, and met its managing director and chief executive Kochhar and executive directors at the closed-door meeting.

Cook also reportedly had lunch at the Mukesh Ambani's billion-dollar residence Antilla, even though the RIL chairman is away in the US.

He is scheduled to have dinner with Bollywood superstar Shah Rukh Khan at his sea-facing residence, Mannat, in Bandra.

At the last leg of his five-day visit, Cook is scheduled to meet Prime Minister Narendra Modi on Saturday, before winding up his visit, and likely to discuss issues pertaining to opening Apple Stores. In the Capital, he is also slated to meet Bharti Airtel chairman Sunil Mittal.

Cook also met four app developers and understood their applications in the city.

"Great to hear from some of India's top iOS developers today. Innovative apps and many ideas for the future!" Cook tweeted in the evening.

Cook will leave for Bangalore and Hyderabad tomorrow.

Apple will set up an app design and development centre in Bengaluru to support developers in India creating innovative mobile apps for its iOS platform.

Cook will also inaugurate its development facility to be used as a mapping centre in Hyderabad tomorrow in the presence of Telangana Chief Minister K Chandrasekhar Rao.

The app design and development accelerator or laboratory will open in the Silicon Valley of the East early 2017, Apple said in a statement. The company, however, did not disclose the investments.

Apple, which is facing slagging sales in the US and Europe, is pushing for opening retail stores in the country, which recorded a whopping 56 per cent jump in sales to over USD 1 billion.

Cook, who took over the job of CEO at the tech Cupertino-based giant in 2011 following the death of its legendary founder Steve Jobs, will be visiting Bengaluru, Hyderabad and New Delhi, and is expected to meet industry to discuss matters like manufacturing and expansion of network in the country.

The company, which has a network of 33 Apple stores in China, is seeking to import and sell refurbished iPhones here but this proposal is facing opposition from authorities.

The Apple CEO's visit comes at a time when the US-based firm is focusing on new growth markets like India after posting its first-ever decline in iPhone sales globally, except here.

India is the world's third-largest smartphone market with over 100 million handsets sold last year. This is projected to grow 25 per cent this year. But Apple's iPhone has only a 2 per cent market share.

In an interview earlier this month, Cook had said Apple saw "huge market potentials" for its products in India and that it was "really putting energy" here.

Cook arrived here from China, where Apple has just invested USD 1 billion in the taxi hailing company Didi Chuxing. The cab hailing company owns equity in Ola, which is the largest taxi-aggregator in the country.

"The company will establish a design and development accelerator in Bengaluru, the home of the country's startup scene. Tens of thousands of developers in India make apps for iOS (foundation for iPhone, iPad and iPod touch). This initiative will provide additional, specialised support for them," Apple said in a statement.

The American tech giant had taken about 1.5 lakh sq ft area on lease in a building owned by Tishman Speyer at Nanakramguda area of the Telegana capital and may use the facility as mapping centre for its applications.

Tech giant Apple will set up an app design and development centre in Bengaluru to support developers in India creating innovative mobile apps for its iOS platform.