Amidst loud cheers of hundreds of supporters, actor-turned-politician Kamal Haasan celebrated the first year anniversary of his political party Makkal Needhi Maiam (MNM), which translates to “Centre for People’s Justice” in English. 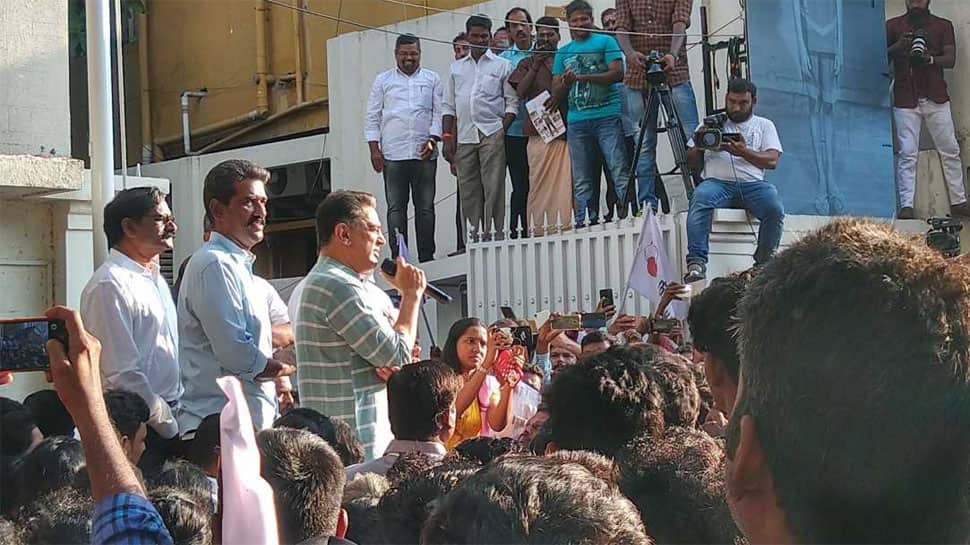 Chennai: Amidst loud cheers of hundreds of supporters, actor-turned-politician Kamal Haasan celebrated the first year anniversary of his political party Makkal Needhi Maiam (MNM), which translates to “Centre for People’s Justice” in English.

Hoisting the party flag at his office in Chennai, Haasan thanked his fans for being the family that helped in the upbringing of the party.

"I am not going alone, it is we and we have people's strength,” he said.

Taking a dig at the current state of Tamil Nadu politics and he said, “the world is witnessing the corruption in Tamil Nadu”.

Haasan will travel to the southern districts of Tamil Nadu to carry out party activities and public meetings later in the day.

Over the last few days, top political parties in Tamil Nadu announced their pre-poll alliances and seat-sharing pact. The AIADMK first came out with an official announcement of their seat-sharing pact with the BJP and PMK, followed by the DMK which formed an alliance with Congress.

After hinting about his political outfit for several days, Haasan formally launched his party on February 21, 2018, it at a public meeting in Madurai after visiting Former President APJ Abdul Kalam’s residence in Tamil Nadu’s Southern district Rameshwaram.

Party is registered with the Election Commission of India and has appointed several district secretaries and functionaries.

The actor has also displayed an ideological leaning towards the Left and the Dravidian movement. Regarding electoral alliances he has remained non-committal and maintained that the party would like to keep its “hands clean” and not ally with the two Dravidian parties.

Haasan's party is the only major new-entrant in Tamil Nadu's political landscape. With uncertainty looming over his decision regarding an alliance, it would be interesting to observe the strategy that the party follows ahead of Lok Sabha election 2019.