A police complaint has been filed by the Chhattisgarh BJP in this connection. 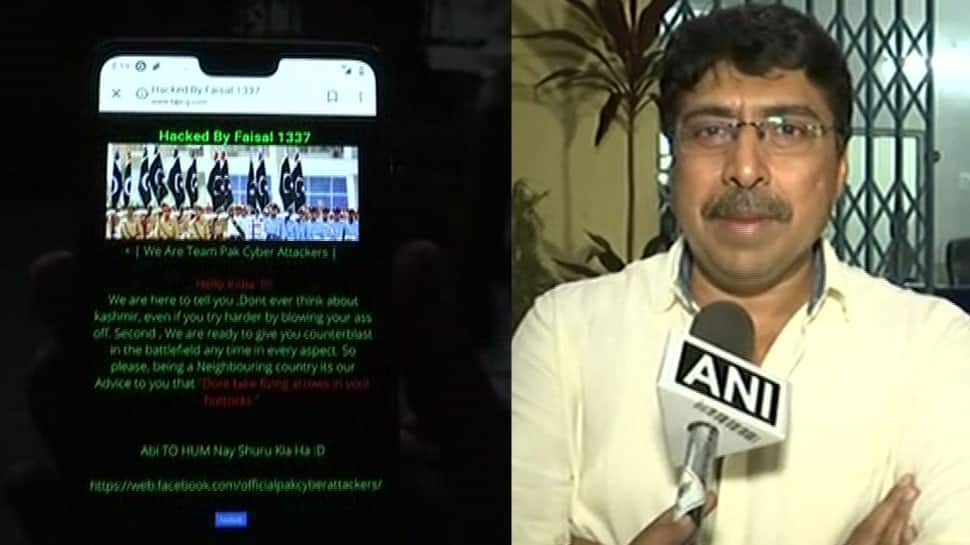 RAIPUR: In yet another incident of cyber attack, the official website of Chhattisgarh unit of BJP was allegedly hacked by Pakistan hackers, reports said on Thursday.

The hackers claimed that they belong to Pakistan.

A message posted on the website read, "We are Pakistan Cyber Attackers."

Chhattisgarh: BJP state website hacked by Pakistani hackers. D Mashke, state BJP IT cell head says, "More than 100 websites were hacked in a cyber-attack, our website was one of them. We've registered a complaint. They can't take us head on, that's why they resort to such things" pic.twitter.com/hb7J1xSzOI

The hackers threatened of a serial blast and attached photographs of Pakistan flag and their Army on the hacked website.

A message posted on the website read, "Don't even think about getting hold of Kashmir."

Sharing more details of the incident, D Mashke, Chhattisgarh BJP IT Cell head, said, "More than 100 websites were hacked in a cyber attack. Our website was one of them.''

The BJP leader said that they have registered a complaint in this regard.

''They can't take us head on and that's why they resort to such things," he added.

Following the cyber attack, the BJP website was inaccessible for some time.

''The country whose mind has been hacked by terrorists will only indulge in this. They have been exposed and isolated globally hence such antics,'' Naqvi told ANI.

However, this is not the first time that Indian websites have been hacked by foreign attackers.

A website of BJP's Goa unit was recently hacked by unknown persons, who posted "Pakistan Zindabad" message on it.

The identity of the group which carried out the cyber attack ''Team Pak Cyber Experts,''and an individual's name "Mohammad Bilal" was also posted on the web page, after it was hacked.

A Pakistani hacker going by the online handle “Muhammad Bilal,” who is also a member of ''Team Pak Cyber Experts,'' had recently hacked the official website of BJP veteran LK Advani.

It may be recalled that anti-Pakistan sentiments are high these days in the wake of a deadly suicide attack on the CRPF convoy in J&K's Pulwama in which at least 40 troopers were killed and several others injured.

India has also warned Pakistan in the backdrop of the Pulwama attack and initiated efforts to isolate the hostile neighbouring country for providing covert support to terrorism.