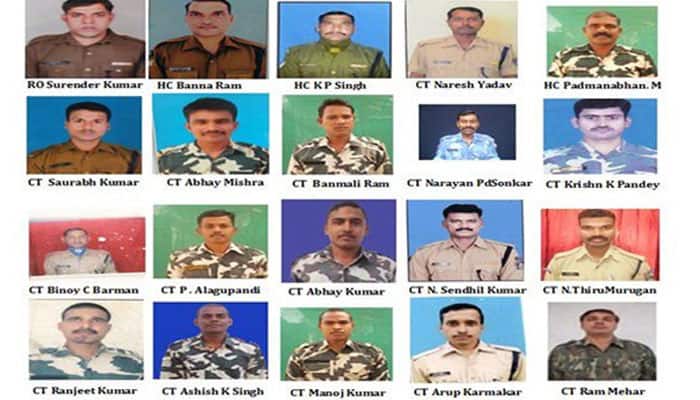 Here are the latest updates in the Sukma encounter case:-

-“Of the 25 CRPF jawans killed in the attack, three hailed from West Bengal. Two were from Cooch Behar and another was from Nadia district. We have decided to give financial assistance of Rs 5 lakh each to the families of the three slain jawans. We will also provide jobs to them”, Mamata Banerjee told reporters, as per PTI.

-The WB government would give Rs five lakh to the family of the slain jawan, she said, as per PTI.

-Tamil Nadu Chief Minister K Palaniswami today condoled the death of four CRPF personnel from the state and announced a solatium of Rs 20 lakh each to their families.

-Getting reports of three Naxal deaths in the attack. Sacrifice of jawans won’t go in vain, will take revenge in Naxals’ stronghold, says Bastar IG.

-Saddened, but at the same time feeling very proud. Not only my son, but many others made this sacrifice: CRPF CT Saurabh Kumar's father.

-Rajnath Singh held a meeting with Chief Minister Raman Singh and other senior officials of the state.

-A high alert has been sounded in Jharkhand in the wake of Sukma Naxal attack on CRPF jawans, say reports.

-We are working to root out the problem of Left Wing Extremism: Singh

-It was a 'cold-blooded murder' in Sukma, says Rajnath Singh.

-We have accepted the attack on our jawans as a challenge: Singh.

-We have decided to revise our LWE strategy if need be, have called a meeting of officials of various state govts on May 8: Rajnath Singh.

-This is a cowardly act, the Centre and state govts will together work and take action. This is an act of desperation, says Home Minister Rajnath Singh.

-Meanwhile, the Ministry of Home Affairs has sought a detailed report from CRPF on Sukma attack, say reports.

-Here are the pictures of 25 CRPF personnel who lost their lives in Sukma Naxal attack yesterday.

-VP Hamid Ansari condemns attack on CRPF personnel in Sukma, says " there cant be any justification for heinous acts;perpetrators be punished".

-"We were set upon by 300 of them... villagers, women and the militia-types in black uniforms. They had rocket launchers... automatic weapons, AK 47, INSAS rifles. We also killed many of them," he claimed.

-Before attacking, the Maoists sent locals to establish the position of the CRPF team, a survivor, Sher Mohammad, had claimed.

-CPI(M) has criticised the Centre over the “barbaric” attack on CRPF personnel, saying it is not concerned about internal security.

-Taking to Twitter, CPI(M) general secretary Sitaram Yechury also wondered on whom the onus of the incident lies and called for fixing political responsibility for the security “failure”.

-Mortal remains of CRPF personnel who lost their lives in Sukma Naxal attack brought to CAF camp (Mana) in Chhattisgarh.

-Director General of the CRPF and senior officials are expected to reach Sukma today.

-Chhattisgarh CM Raman Singh had cancelled his engagements in Delhi and has rushed for Raipur where he will hold a meeting later today.

-The attack on CRPF jawans is cowardly and deplorable, said PM Modi, while Rajnath Singh vowed ''nobody will be spared and the sacrifice of the slain jawans won't go in vain.''

-The mortal remains of six personnel have reached the Burkapal camp.

-The six injured CRPF personnel have been shifted to a hospital in Raipur.

-As many as 90 CRPF jawans were part of the road opening party when they were attacked by the Naxals.

-The weapons of the CRPF jawans were also looted by Naxals.

-The attack took place on personnel of the 74th Battalion of the CRPF as they were assisting the local population in road building activity in the district.