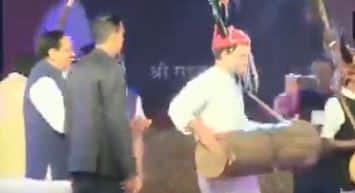 Ahead of that, the Gandhi scion took to the micro-blogging website Twitter and wrote, "This unique festival is an important step towards showcasing and protecting our rich tribal cultural heritage."

I am in Chhattisgarh today to inaugurate the National Tribal Dance Festival, in Raipur.

This unique festival, is an important step towards showcasing & protecting our rich tribal cultural heritage. pic.twitter.com/FYzVH9OUr6

Clad in white attire and red headgear with artificial Bison horns, the young Congress MP while beating a drum, roved and swayed around in circles with the tribals.

"It is a very popular dance of Dandami madia tribe of Abujhamad in Bastar area and is also known as Gour dance. This dance is performed by a group of male and female dancers. The male dancers are adorned with bison horn crown and play the drum while dancing," tweeted the official page of the tribal festival.

Chhattisgarh Chief Minister Bhupesh Baghel and other top party leaders also shared the stage with Gandhi and danced on the rhythm of the music.

The Congress leader, later, accorded the headgear on the chief minister`s head who then danced and posed for photographs.

After arriving in the state, Rahul Gandhi termed the National Register of Citizens (NRC) and National Population Register (NPR) as an ''attack on the poor people of the country'' and said that it was akin to taxing them.

"I am saying that it is an attack on poor people. Poor people are asking how will we get employment? The economy earlier used to grow at 9 per cent, now it has come down to 4 per cent, that too when it is being measured by the new method. By the old method, it will be 2.5 per cent," he added.

Lamenting about the state of the economy, Rahul said, "You know about the economy. Today, unemployment is highest in 45 years. That is not so in Chhattisgarh. Because we are helping farmers here, providing them with the right prices. BJP and Narendra Modi government in the country are not able to explain why they blew the Indian economy to pieces," he said while speaking to reporters here.