Heavy rains continued to lash several parts of western and northern India on Thursday. The India Meteorological Department has predicted heavy to moderate showers in the states of Rajasthan, Chhattisgarh, and Gujarat. 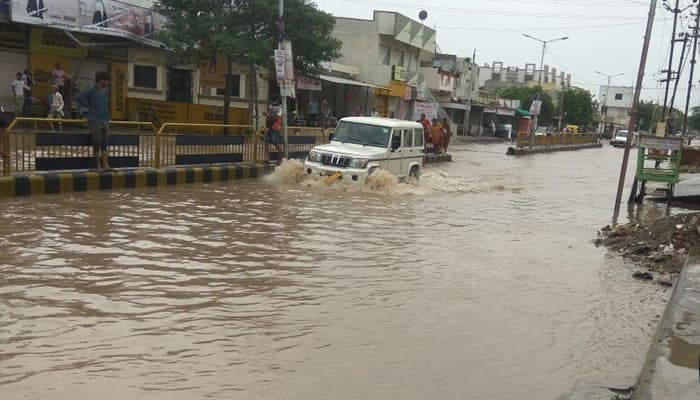 Heavy rains continued to lash several parts of western and northern India on Thursday. The India Meteorological Department has predicted heavy to moderate showers in the states of Rajasthan, Chhattisgarh, and Gujarat.

Heavy rainfall is also likely in Odisha, Andaman, and Nicobar Islands, Karnataka and Kerala. “Thunderstorm accompanied by lightning very likely at isolated places over Jharkhand and Gangetic West Bengal,” said the weather department in a release.

An alert has already been issued in Gujarat's Saurashtra and Kutch regions which have been witnessing heavy downpour. The alert was issued across 20 villages of Bharuch, Ankleshwar and Jhagadia after Narmada River's water level swelled to 27.50 feet near the Golden Bridge, which connects Ankleshwar to Bharuch. The rise in levels was due to continuous release of water from Sardar Sarovar Dam.

Light to moderate rain or thundershowers will occur at few places over the Coastal Andhra Pradesh and Telangana on August 28 and 29. "Light to moderate rainfall is likely to occur at isolated places over Telangana and Coastal Andhra Pradesh on August 31 and September 1. However, no heavy rainfall warning has been issued by the IMD for the next three days", Meteorologist Raja Rao, from Hyderabad IMD told ANI.