The BMW 7 series will be available in six variants and is priced between Rs 1.23 crore and Rs 2.43 crore (ex-showroom India), while the starting price of all-new BMW X7 SUV in India is Rs 98.90 lakh.

German automaker BMW on Thursday launched its BMW 7 series and X7 in India. The BMW 7 series will be available in six variants and is priced between Rs 1.23 crore and Rs 2.43 crore (ex-showroom India), while the starting price of all-new BMW X7 SUV in India is Rs 98.90 lakh. 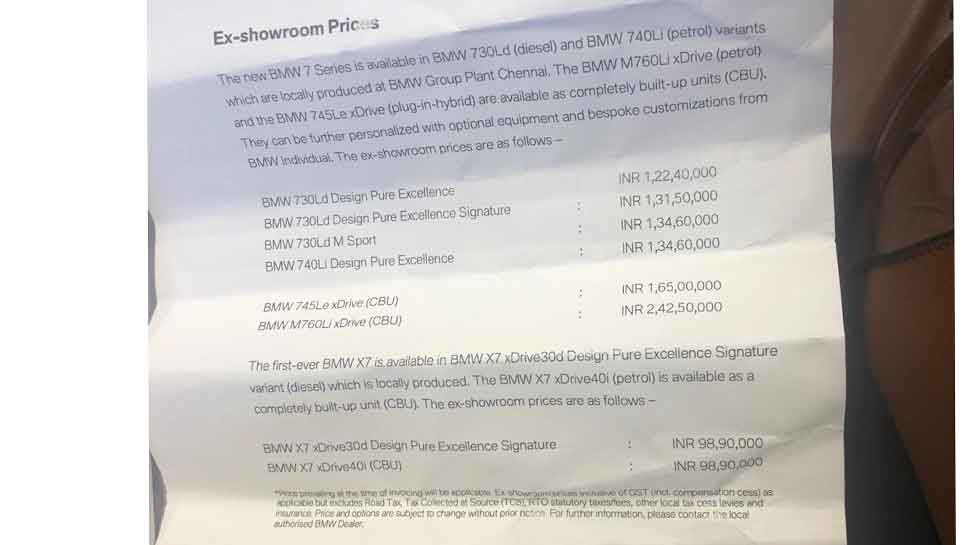 The BMW 7 is available only with the long-wheelbase version and the entire front end of this luxury car has been given an update. The new 7 Series comes with a sleek bumper and a connecting light strip. A glass roof is offered as standard while the higher variants come fitted with a Sky Lounge feature with 15,000 illuminated graphics embedded into the glass panel.

The BMW 7 boasts of a new steering wheel with a reworked control layout. The seats are made using Nappa leather and the car comes fitted with a 12.3-inch digital instrument cluster and a 10.25-inch touchscreen infotainment system. For rear passengers, there are two tiltable 10.2-inch BlueRay units.

The BMW 7 series has got four engine options- two petrol, one plug-in hybrid and a diesel. All these engine options come with an 8-speed Steptronic automatic transmission. The 745Le (plug-in hybrid) gets a 3.0-litre 6-cylinder petrol engine that makes 384PS of power and 600Nm of combined torque. The luxury car has a efficiency of 39.5kmpl and it is capable of running on pure electric power for 58km with a top speed of 140kmph.

The BMW X7 has been launched in only two trims - xDrive30d DPE Signature and xDrive40i. The price of both models is Rs. 98.90 lakh (ex-showroom). The BMW X7 comes wirth Glass finished central console buttons and 10.2 inch touchscreens at rear with bluray. The massage functions of BMW X7 can be controlled from the rear seat. The new version boasts of wireless charging and 12.3 inch infotainment display, digital instrument cluster, Intelligent 4wd system and dynamic control.

Talking about new BMW 7 Series, the automaker said, "The BMW 7 Series sedan is the flagship of BMW brand and epitome of the BMW luxury class. The new BMW 7 Series demonstrates our understanding of modern luxury, confident presence and maximum comfort. Imagined and crafted for individuals who value every moment, it takes you on a journey inspired by those who drive the world."