The world`s largest planemaker is facing one of the biggest crises in its 103-year history following the disasters on Lion Air in Indonesia on Oct. 29 and another on Ethiopian Airlines on March 10, which together killed all 346 on board. 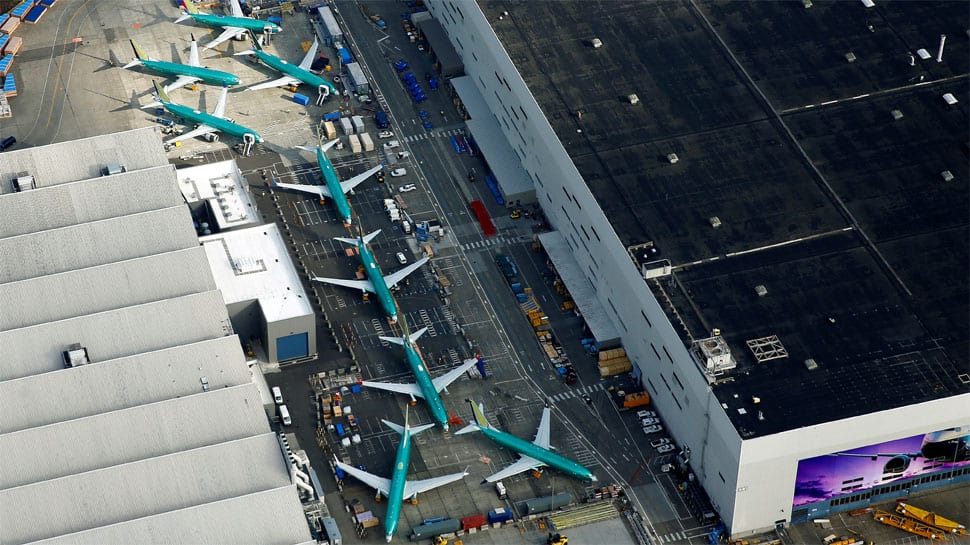 Boeing Co on Wednesday abandoned its 2019 financial outlook, halted share buybacks and said lowered production due to the grounding of its fastest-selling 737 MAX jet after two fatal plane crashes in five months had cost it at least $1 billion so far.

The world`s largest planemaker is facing one of the biggest crises in its 103-year history following the disasters on Lion Air in Indonesia on Oct. 29 and another on Ethiopian Airlines on March 10, which together killed all 346 on board.

Chicago-based Boeing is now reckoning with a blow to its reputation and the financial cost of getting the planes back in the air. It met sharply lowered Wall Street profit estimates for the first quarter, largely due to stopping deliveries of the money-spinning 737 MAX jets and a slowdown in production.

The production dip alone has cost it $1 billion so far, the company said, because the lower rate means the planemaker has to pay more for parts, which are priced according to the volume Boeing buys.

Boeing also booked unspecified charges related to developing a software fix for an anti-stall system that Boeing has acknowledged played a role in both crashes, and pilot training.

Chief Executive Dennis Muilenburg told analysts on a conference call that Boeing has confidence in its software fix and expects a certification flight with the U.S. Federal Aviation Administration in the "near term" after completing more than 135 test and production flights.

He did not give a timeline for when the MAX would fly again commercially, saying the timing "will continue to be paced" by global regulators and airlines. He defended the company`s aircraft development process but indicated he was open to improvements.

"If there`s something that we can do to make airplane development programs or the certification process better and safer, we will pursue it," Muilenburg said.

Reuters reported on Tuesday that Boeing told some 737 MAX owners it was targeting FAA approval of its software as early as the third week of May, and the ending of the grounding around mid-July, when it could resume building 52 aircraft per month.

REPAIRING THE BRAND
A fuller picture of how much the grounding will cost Boeing and how it plans to repair its image with the flying public will not emerge until the end of the second-quarter as 737 production cuts did not begin until mid-April.

"Boeing had little new to provide on how exactly the 737 MAX situation is likely to pan out," said Vertical Research Partners analyst Robert Stallard. "We think a return to flight in August is probably optimistic, but September is possible."

Muilenburg said the company did not see any changes to the underlying certification process for its all-new 777X twin-aisle jetliner in light of the MAX crashes and said the programme remained on track for delivery in 2020. Boeing continues to work "in parallel" on plans for a potential new mid-sized airplane, although Muilenburg stressed the 737`s return was a higher priority.

He also defended his role as both CEO and chairman of Boeing after calls from some shareholders that the jobs be divided.

Boeing shares closed up 0.4 percent at $375.46. They are still down about 10 percent since the Ethiopian Airlines crash, wiping almost $25 billion off the company`s market value.

DEFENDS 737 MAX DEVELOPMENT
The crashes caused regulators worldwide to ground the 737 MAX and triggered investigations into the aircraft`s development by federal transportation authorities and the U.S. Department of Justice.

Although safety experts have raised some questions over crew performance in both crashes, attention has focussed on anti-stall software known as MCAS, which Boeing has acknowledged was a common link in the separate chains of events leading to both crashes.

"We know exactly how the airplane was designed. We know exactly how it was certified," he said. "We`ve taken the time to understand that. That has led to the software update that we`ve been implementing and testing and we`re very confident that when the fleet comes back up, the MAX will be one of the safest airplanes ever to fly."

Boeing cut production of the jets following the MAX grounding to 42 aircraft per month, down from 52, and its operating cash flow in the first quarter was around $350 million lower than a year earlier.

Boeing said it would issue a new financial forecast when it knows more bout issues surrounding the 737 MAX. In January, it said it expected full-year revenue of $109.5 billion to $111.5 billion and core earnings per share between $19.90 and $20.10.

The company repurchased $2.3 billion of its shares in the latest quarter, all of which occurred prior to mid-March. Boeing bought back $9 billion of its stock last year.

Excluding certain items, Boeing said its core earnings fell to $3.16 per share, in the quarter from $3.64 per share, a year earlier. That matched analysts` average estimate.