Lakshmi Vilas Bank crisis: This bank will acquire debt-ridden LVB--Here's all you want to know

The RBI placed in the public domain a draft scheme of amalgamation of LVB with DBS Bank India Ltd (DBIL).

New Delhi: The government has announced a scheme to merge the cash-strapped Lakshmi Vilas Bank with DBS India. The step was taken on the advice of the Reserve Bank in view of the private sector bank's deteriorating financial health.

The RBI placed in the public domain a draft scheme of amalgamation of LVB with DBS Bank India Ltd (DBIL). DBS Bank India, in a statement, said the proposed amalgamation will provide stability and better prospects to LVB's depositors, customers and employees.

Private sector lender Lakshmi Vilas Bank was on Tuesday (November 17) brought under moratorium with immediate effect till December 16, 2020, thereby, staying all actions and proceedings against that banking company during this period.

During the month-long moratorium, the cash withdrawal limit has reportedly been capped for customers at Rs 25,000 in a month. The moratorium was imposed on the basis of an application submitted by the Reserve Bank of India (RBI) under Section 45 of the BR Act,  according to a statement from the Ministry of Finance.

The statement said, "In exercise of the powers conferred by sub-section (2) of section 45 of the Banking Regulation Act, 1949 (10 of 1949), the Central government, after considering an application made by the Reserve Bank of India under sub-section (1) of that section, hereby makes this Order of moratorium in respect of the Lakshmi Vilas Bank Limited, Karur, Tamil Nadu for the period with effect from 18:00 hrs on the 17th day of November 2020 up to and inclusive of 16th day of December 2020 and hereby stays the commencement or continuance of all actions and proceedings against that banking company during the period of moratorium, subject to the condition that such stay shall not in any manner prejudice the exercise by the Central government of its powers under clause (b) of sub-section (4) of section 35 of the said Act or the exercise by the Reserve Bank of India of its powers under section 38 of the said Act." 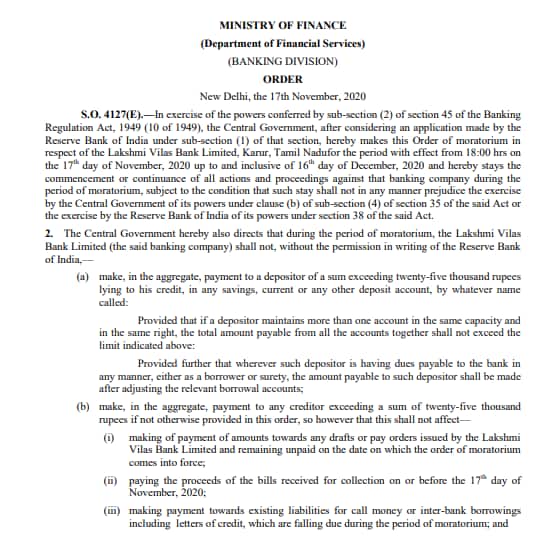 The Reserve Bank also superseded the board of Lakshmi Vilas Bank (LVB) and appointed T N Manoharan, former non-executive chairman of Canara Bank, as its administrator for 30 days.

LVB is the second private sector bank after Yes Bank which has run into rough weather during this year. In March, capital-starved Yes Bank was placed under a moratorium. The government rescued it by asking state-run SBI to infuse Rs 7,250 crore and take 45 percent stake in the bank.

Meanwhile, the Reserve Bank of India (RBI) has assured the depositors of the bank that their interest will be fully protected and there is no need to panic.

"In terms of the provisions of the Banking Regulation Act, the Reserve Bank has drawn up a scheme for the bank’s amalgamation with another banking company. With the approval of the Central government, the Reserve Bank will endeavour to put the Scheme in place well before the expiry of the moratorium and thereby ensure that the depositors are not put to undue hardship or inconvenience for a period of time longer than what is absolutely necessary," the RBI said.