Not involved in any cash payment arrangement to Venezuela's PDVSA for oil: Reliance

In a press statement issued on Saturday, the company termed the media reports as ''false and reckless.''

MUMBAI: Reliance Industries has categorically rejected media reports that it is involved in an arrangement that leads to cash payments for oil supplies to Venezuelan state oil company PDVSA via third parties.

In a press statement issued on Saturday, the company termed the media reports as ''false and reckless.'' 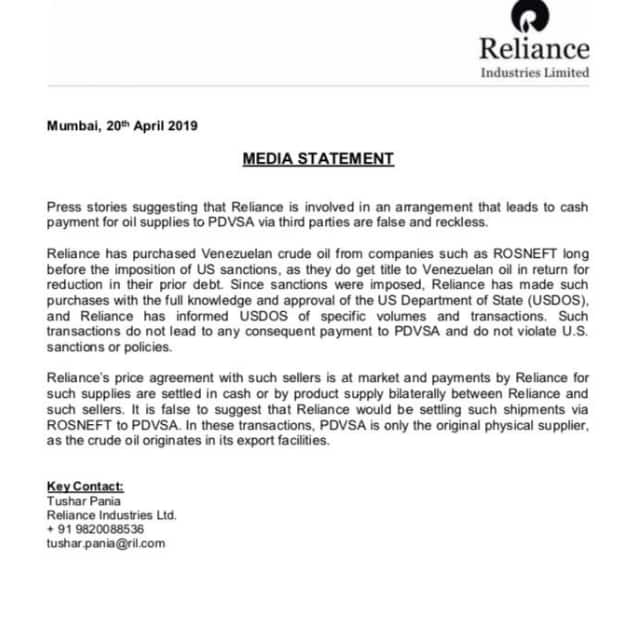 The company also claimed that it is not in violation of any US sanctions.

The Indian oil refinery giant stated that since sanctions were imposed, Reliance has made any such purchases of Venezuelan oil with the full knowledge and approval of the United States government.

In its statement, Reliance maintained that such transactions do not lead to any consequent payment to PDVSA and do not violate US sanctions or policies.

Reliance said that the oil is bought at market prices and payments by Reliance for such supplies are settled in cash or by-product supply bilaterally between Reliance and the sellers.

''It is false to suggest that Reliance would be settling such shipments via Rosneft to PDVSA,'' it added.

It was earlier reported that Venezuela`s President Nicolas Maduro is funnelling cashflow from Venezuelan oil sales through Russian state energy giant Rosneft as he seeks to evade US sanctions designed to oust him from power.

The story cited one internal PDVSA document and a source which indicated that shipments of Venezuelan oil to Reliance in April would be settled via Rosneft.

The document further showed that PDVSA and Reliance would pay a fee equivalent to around 3 per cent of the sale price, split between them.

However, the same has now been categorically rejected by the Reliance Industries on Saturday.