Virat Kohli-led India won the toss and opted to bat first on the first day of the opening Test of the three-match series against South Africa at ACA-VDCA Cricket Stadium in Visakhapatnam on Wednesday. 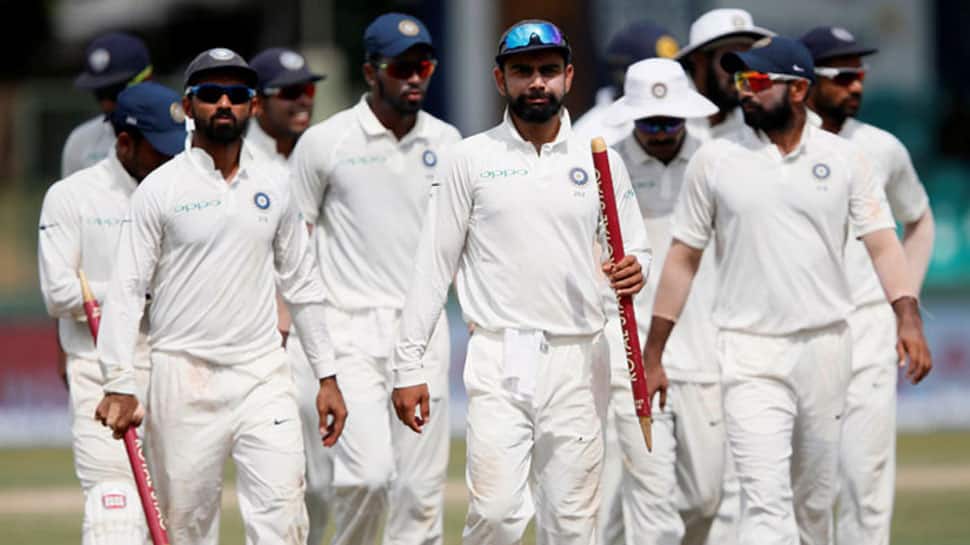 Rohit Sharma smashed a blistering century while Mayank Agarwal well-supported him with an unbeaten 84-run knock before rain played the spoilsport and forced early stumps on the first day of the opening Test of the three-match series against South Africa at ACA-VDCA Cricket Stadium in Visakhapatnam on Wednesday.

# The play has been stopped due to rain!

# CENTURY! Rohit Sharma has brought up a century off 154 balls.He reached the mark with two runs on the last delivery of the 54th over by Senuran Muthusamy. India 179/0 (54 overs)

# Rohit Sharma (81) and Mayank Agarwal (68) seem to be on a roll today as they have now stitched a 150-run stand for the opening wicket. India reached the mark when Agarwal drove the fifth delivery of the 48th over to long-on for a single. India 151/0 (49 overs)

# Rabada conceded seven runs in the 44th over before Maharaj and  Piedt bowled a tight over each to give away just four runs combined. Sharma is currently standing strong at 80, while Agarwal is well supporting him batting at 58. India 139/0 (46 overs)

# Eight runs off the last two overs, including a four from Rohit (64*). The Indian openers continue to maintain their dominance over the South African bowlers who are yet to get the breakthrough. India 118/0 (39 overs)

# FIFTY! Mayank Agarwal has brought up a Test half-century off 116 balls. He reached the milestone by driving the fourth delivery of the 37th over towards extra cover for a six. India 110/0 (37 overs)

# Rohit Sharma (58) and Mayank Agarwal (45) have guided India past 100 runs. Indian reached the mark when Agarwal flicked the third delivery of the 35th over through midwicket for a boundary.The South African bowlers are desperately looking for a wicket now. India 103/0 (36 overs)

# Eight runs off the last two overs. Rohit Sharma (58) smashed the second delivery of the 31st over towards cover for four runs, while Agarwal (41) is approaching half-century. India 99/0 (33 overs)

# Maharaj to open the attack for South Africa after lunch.

# FIFTY! Rohit Sharma (52) continues to stand strong at the crease as he has brought up a Test half-century off 84 balls. He reached the mark by edging the last delivery of the 29th over by Muthusamy past backward square fr four runs. Agarwal, on the other hand, is currently batting at 39. India 91/0 (29 overs)

FIFTY!@ImRo45 brings up his first half-century as a Test opener and his 11th overall.

# Senuran Muthusamy comes into the attack!

# Rohit Sharma (28) and Mayank Agarwal (32) remain steady at the crease as India cross the 50-run mark in the first innings against South Africa. Sharma lofted the first delivery of the 20th over towards the long-on to score the first maximum of the match and bring up fifty for the opening stand. India 60/0 (21 overs)

# Dane Piedt comes into the attack!

# Rohit Sharma and Mayank Agarwal continue to remain strong at the crease at their respective scores of 19 and 27. The South Africa bowlers are yet to give the breakthrough to their side, with the hosts approaching a 50-run mark.India 46/0 (18 overs)

# 13 runs off the last four overs. Agarwal (19) drove the fifth delivery of the 13th over past mid-on and to the bowler's right for four runs before he came on the front foot on the fourth delivery of the 14th over to drive pleasingly through cover for another boundary. India 35/0 (14 overs)

# The South African bowlers are piling pressure on the Indian openers by avoiding conceding easy runs to them. While Rabada has bowled two back-to-back maiden overs, Maharaj has given away just three runs to the oppositions in his first over of the match. India 22/0 (10 overs)

# Faf du Plessis ropes in Keshav Maharaj into the attack!

# After a good maiden fifth over by Philander, Rohit (8*) and Mayank (11*) notched up 10 runs off the next two overs. Agarwal edged the third delivery of the sixth over between third slip and gully for four runs before Sharma punched the third ball of the seventh over through backward point for another four runs. India 19/0 (7 overs)

# The hosts managed to add just five runs in the last three overs, with Rabada also bowling a maiden fourth over. Sharma got off the mark as an opener in Test cricket by driving the second delivery of the second over up through backward point for four runs. India 9/0 (2 overs)

# Four runs off the very first over. Agarwal got off the mark with a smooth cover drive on the third delivery for a boundary, while Rohit is yet to open his account. India 4/0 (1 over)

# Rohit Sharma and Mayank Agarwal to open the first innings for India. Vernon Philander begins the proceedings for South Africa.

# The first day of the opening Test between India and South Africa will begin shortly.

India will look to begin their home leg of the ICC World Test Championship on a promising note when they lock horns with South Africa in the opening Test. The Virat Kohli are currently standing at the top of the World Test Championship points table with 120 points after clinching the two-match series against West Indies 2-0 last month.

Meanwhile, South Africa—who will be playing their first match since the retirement of Dale Steyn and Hashim Amla—will look to kick start their Test Championship campaign on a winning note.

Heading into the series, India will look to snap the record of 10 straight home series victory which they current hold with Australia.

Focus will be on one-day big hitter Rohit Sharma, who will look to come up with some good performances in order to strengthen his chances of becoming India’s first-choice Test batsman.

Meanwhile, Indian skipper Virat Kohli on Tuesday informed that Wriddhiman Saha will be donning the hat of wicket-keeping instead of Rishabh Pant. Saha had made his last appearance for the national side against the Proteas in January 2018.

India had sealed the four-match Test series 3-0 when South Africa had last toured the country in 2015.