Dean Elgar smashed a blistering knock of 160 runs and wicketkeeper-batsman Quinton de Kock well-supported him with a 111-run knock before Ravichandran Ashwin's five-wicket haul restrict South Africa to 385 for eight in their first innings at the end of the third day's play of the opening Test at ACA-VDCA Cricket Stadium in Visakhapatnam on Friday. 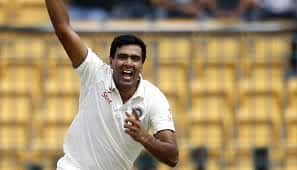 Dean Elgar smashed a blistering knock of 160 runs and wicketkeeper-batsman Quinton de Kock well-supported him with a 111-run knock before Ravichandran Ashwin's five-wicket haul restrict South Africa to 385 for eight in their first innings at the end of the third day's play of the opening Test at ACA-VDCA Cricket Stadium in Visakhapatnam on Friday.

At the end of the day's play, South Africa reduced their first-innings gap to 117 runs, with Senuran Muthusamy (12) and Keshav Maharaj (three) batting at the crease.

# Keshav Maharaj is the new batsman in!

# WICKET! Ashwin completes his five-wicket haul. Philander went back to the pavilion without opening his account after being clean bowled by the Indian spinner on the second delivery of 113rd over. South Africa 379/8 (115 overs)

# Vernon Philander is the new batsman in!

# WICKET! Quinton de Kock departs for 111. The South African batsman was clean bowled by Ashwin on the third delivery of the 110th over. South Africa 370/7 (110 overs)

# 11 runs off the last two overs. Quinton de Kock (107) has brought up a century off 149 balls. He reached the mark by smashing the first delivery of the 105th over by Ashwin towards extra cover for a six. He  then pulled back four runs off the very next ball. South Africa 365/6 (105 overs)

# Elgar (160) and De Kock (88) continue to attack the Indian bowlers at the crease and have pushed their partnership past 150 runs. South Africa are now trailing by 160 runs with five wicket in hand. South Africa 342/5 (99 overs)

# Elgar continues to pile runs on the scoreboard as he has brought up a 150-run knock off 270 balls. He reached the mark with a backward point boundary on the fifth delivery of the 92nd over. South Africa 316/5 (92 overs)

# Good last three overs from the Indian bowlers as they conceded just six runs to South Africa. Elgar (137) and De Kock (71) have reduced South Africa's deficit in the first innings to 204 runs. India need to break this partnership in order to stage a comeback in the match. India 298/5 (90 overs)

# South Afrtica added another 24 runs in the last four overs. De Kock (68) flicked the fourth delivery of the 84th over along the ground past first slip for four runs before he slapped the very next delivery from Hanuma Vihari through covers for another boundary. South Africa 287/5 (84 overs)

# The second new ball is taken! Ravichandran Ashwin to replace Rohit Sharma into the attack.

# Elgar (122) and De Kock (45) continue to trouble the Indian bowlers. The duo is looking comfortable at the crease, with De Kock also approching his half-century. India are desperately looking to break the partnership. South Africa 261/5 (80 overs)

# Elgar (114) is currently standing strong at the crease, while De Kock (34) has also settled at the middle to reduce South Africa's first-innings gap to 267 runs. The Indian bowlers, on the other hand, are desperately looking for a wicket. South Africa 235/5 (72 overs)

# 11 runs off the last four overs. Elgar (107) continues to stand strong at the crease and is looking for a good support from De Kock (16) as South Africa currently trail by 287 runs in the first innings. De Kock lofted the fifth delivery of the 67th over towards mid-on for four runs before he drove the very next delivery beautifully towards the point region for another boundary. South Africa 209/5 (67 overs)

# CENTURY!! Dean Elgar has completed his 12th Test century off 175 deliveries. He reached the three-figure mark by slamming the fifth delivery of the 60th over towrads the midwicket for a six. South Africa 193/5 (60 overs)

What a knock! Helmet off, arms raised aloft for what has been a brilliant knock.

Dean Elgar brings up his first ton in India and he does it in style with a six over mid-wicket.
DYK? This is his 12th test ton#ProteaFire #INDvsSA pic.twitter.com/AwE9ddwlE6

# WICKET! Soon after bringing up his half-century, Faf du Plessis (55) was caught by Cheteshwar Pujara at leg slip on the third delivery of the 58th over by Ashwin. With this, the partnership of 115 runs between the South African skipper and Elgar has also come to an end. South Africa 181/5 (58 overs)

# FIFTY!! Faf du Plessis has brought up a half-century off 91 balls. The South African skipper reached the mark by flicking the fourth delivery of the 53rd over by Mohammad Shami to fine leg's left off the back foot for two runs. South Africa now trail by 344 runs after the 54th over of the first innings. South Africa 164/4 (54 overs)

# Jadeja bowled a quite expensive 44th over, conceding 16 runs to South Africa--including two sixes and a boundary by Elgar. The Proteas are now trailing by 353 runs in the first innings, with Elgar and Du Plessis comfortably batting at their respective scores of 76 and 44. South Africa 149/4 (48 overs)

# Elgar (58) continues to remain steady at the crease and he is also getting a good support from skipper Du Plessis (37) at the other end. The pair has brought up a 50-run partnership and reduced the first innings gap to 378 runs with six wickets remaining. South Africa 124/4 (43 overs)

# FIFTY! Dean Elgar continues to stand strong at the crease as he has brought up a Test half-century off 112 balls. He reached the mark by driving the first delivery of the 40th over down to long-on for a single. South Africa, meanwhile, have also crossed the 100-run mark. South Africa 107/4 (39.1 overs)

# The visitors have now reduced the first innings gap to 410 runs. Elgar (44) is approaching his Test half-century, while Du Plessis is currently batting at 20.South Africa 92/4 (35 overs) at Drinks

# South Africa added 14 runs in the last four overs. Ashwin was smashed by Faf du Plessis for two back-to-back boundaries in the 30th over. The South African skipper whipped the third delivery of that over past backward square for four runs and to got off the mark. South Africa 77/4 (31 overs)

# Mohammad Shami comes into the attack.

# WICKET! Ishant Sharma gets the breakthrough. Temba Bavuma (18) was trapped right in front on the first delivery of the 27th over. South Africa are now down by four wickets South Africa 63/4 (27 overs)

A ball on a good length jags back and strikes Temba on the pad. He thinks about the review but his partner convinces him it was plum. He parts for 18 off 26 balls.

# Ashwin bowled a maiden over before he along with Ishant Sharma conceded 20 runs to South Africa, including four boundaries. The visitors have now crossed a 50-run mark and are currently trailing by 439 runs with seven wickets remaining in the innings. South Africa 59/3 (26 overs)

# Four runs off the very first over of the day. Elgar and Bavuma have resumed South Africa's first innings and are currently batting at their respective scores of 27 and six. Bavuma smashed the second delivery from Ishant between the slips to add four runs.South Africa 43/3 (21 overs)

# Dean Elgar and Temba Bavuma have walked down the crease to resume South Africa's first innings. Ishant Sharma to open the attack for India today.

The sky hasn’t been this clear since we arrived in Vizag. Hello and welcome to day 3 of the first Test match vs India. #FreedomSeries #INDvSA pic.twitter.com/9jgLcYmJqb

On Thursday, Indian opener Mayank Agarwal smashed his maiden Test double hundred while Rohit Sharma well-supported him with a blistering 176-run knock to guide India to a mammoth first innings total of 502/7 declared. Subsequently, the spin duo of Ravinchandran Ashwin and Ravindra Jadeja helped the hosts reduce South Africa to 39 for three at stumps on Day 2.

At the end of the day's play, opener Dean Elgar and Temba Bavuma were batting at the crease at their respective scores of 27 and two.

Earlier, resuming the second day at 202 for 0, Agarwal first pulled back his maiden Test century off 204 balls on his home debut in the longest format of the game before pulling back his first double hundred off 358 balls.

Agarwal eventually finished with a 215-run knock, including 23 boundaries and six maximums during his innings. As a result, he became the first Indian opener to smash a double ton since Sehwag's 293-run knock against Sri Lanka at the Brabourne Stadium in Mumbai in December 2009.

Agarwal along with Rohit Sharma (176) also became the third Indian opening duo to stitch a 300-plus stand in the longest format of the game.

In 2015, India had sealed the four-match Test series 3-0 when South Africa had last toured the country.