Vihari got to his landmark in 200 balls and was caught behind off Kemar Roach's bowling for 111 from 225 balls, his innings laced with 16 fours. 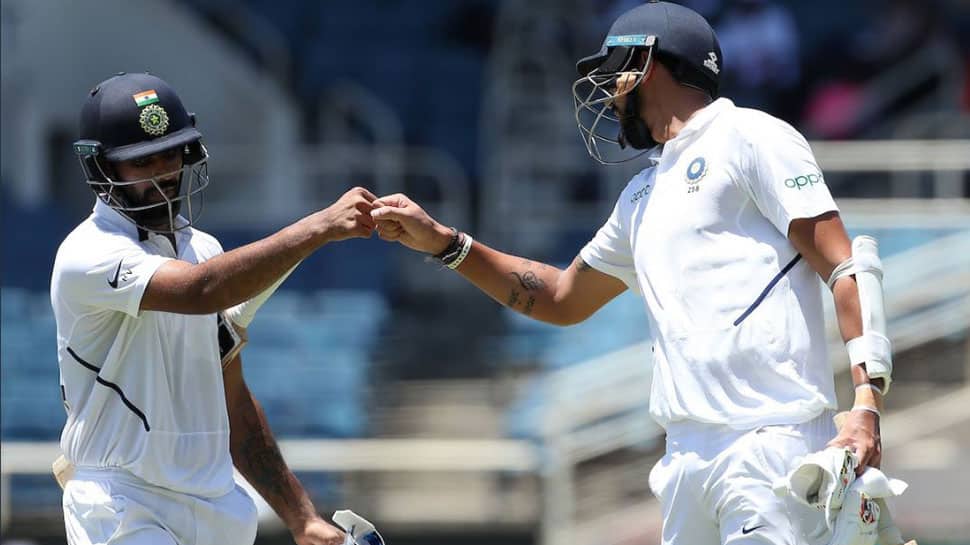 Hanuma Vihari notched up his maiden Test hundred while tailender Ishant Sharma got to his first-ever fifty as India were all out for 416 at tea on Day 2 of the second and final Test against the West Indies at the Sabina Park on Saturday.

Vihari got to his landmark in 200 balls and was caught behind off Kemar Roach's bowling for 111 from 225 balls, his innings laced with 16 fours.

Ishant brought up his maiden half-century to loud cheers from the dressing room as the pair stitched together a 112-run run partnership for the eighth wicket. Ishant (57 off 80 balls; 7x4) holed out to deep midwicket where Shimron Hetmyer took the catch off Kraigg Brathwaite.

Mohammed Shami could not add to the total while Jasprit Bumrah remained not out on 0 as Vihari got out to end India's innings.

For the Windies, skipper Jason Holder was brilliant with the ball and picked up five wickets, giving away 77 runs. It was all about Vihari as he showed superb composure after being dropped on 68 by John Campbell to bring up his hundred by taking one run off Kemar Roach in the 134th over.

Vihari, 25, leapt in the air and punched his fists as the dressing room stood and applauded his effort.

Vihari, who cracked a career-best 93 in the second innings of the first rubber as India won by a mammoth 318 runs, had earlier brought up his third half-century in just his sixth Test appearance after resuming on 42 with India on 264/5.

At lunch, he was batting on 84 from 158 balls. Ishant was batting with Vihari on 11. The tourists lost under-fire wicketkeeper-batsman Rishabh Pant in the first ball of the day as the 21-year old failed to add to his overnight score of 27, Jason Holder removing his stumps with a delectable inswinger.

Windies skipper Holder, who bowled brilliantly on Day 1 to dismiss India counterpart Virat Kohli (76) among others, was the pick of the bowlers. Vihari and Ravindra Jadeja then added 38 for the seventh wicket before debutant Rahkeem Cornwall (3/105) had Jadeja caught at mid-on by Darren Bravo.

Jadeja showed a lot of patience for his 16 from 69 balls but Cornwall won the battle of attrition with a length ball outside off which the Saurashtra allrounder slogged to Bravo.

At the other end, there was no stopping Vihari who went about his job with poise and showed composure of the highest order.