England were left rattled in the very first over of their second innings with Pat Cummins dismissing Rory Burns and Joe Root off consecutive deliveries. 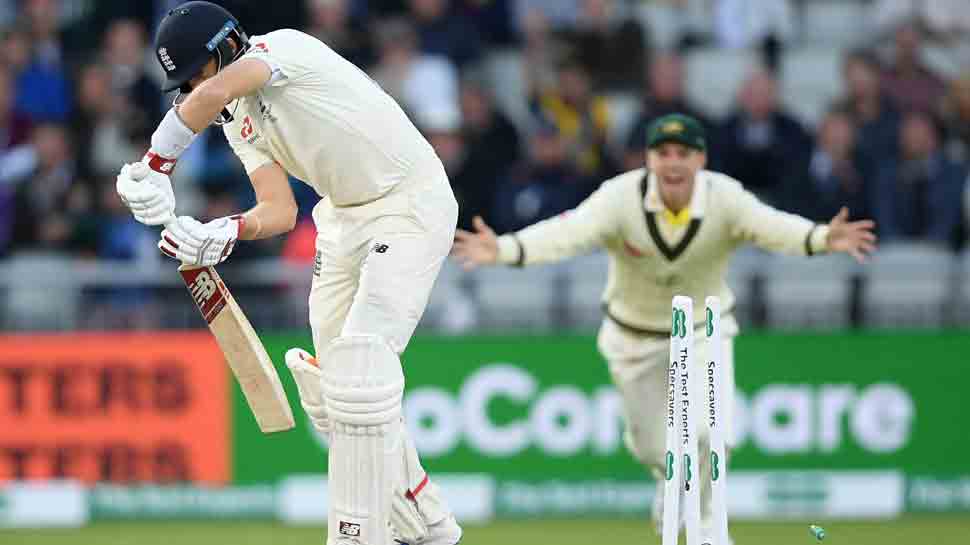 Australia bossed the proceedings on Day 4 of the fourth Ashes Test at Old Trafford. They set England a target of 383 and need to take eight wickets on the final day to take a 2-1 lead in the series and retain the Ashes.

England were left rattled in the very first over of their second innings with Pat Cummins dismissing Rory Burns and Joe Root off consecutive deliveries. Jason Roy managed to deny Cummins his hat-trick. He managed to stick around with Joe Denly, who was his opening partner until the last Test before he was demoted to number four and England's overnight total is 18/2.

Earlier in the day, the hosts managed to avoid the follow on thanks to Jos Buttler scrapping it out with the tail but he was dismissed soon after as Australia started their second innings with a 196-run lead.

Australia were set back by Stuart Broad and Jofra Archer in the early part of the innings as they dismissed David Warner, Marcus Harris, Marnus Labuschagne and Travis Head before they could make a significant difference to the scorecard.

However, Matthew Wade stuck with Steve Smith as the latter upped the tempo with some typically unorthodox shots. Smith looked set for an astonishing fourth century of the series with the England bowlers looking hapless whenever he was on strike.

However, the 30-year-old went for one shot too many as it turns out, with his dismissal coming when he tried to go big off Leach and ended up holing out in the deep. His score of 82 is his lowest in this series.

Wade followed soon after after which Australian captain Tim Paine put together 28 runs with Mitchell Starc before suddenly declaring in the middle of the 49th over. England start Day 5 365 runs away from their target while Australia need 8 wickets to win.

Used to tell people I wanted to be like Sachin Tendulkar: Virat Kohli