India will look to complete a series whitewash against Bangladesh when they lock horns in the second Test, beginning November 22 at Eden Gardens. 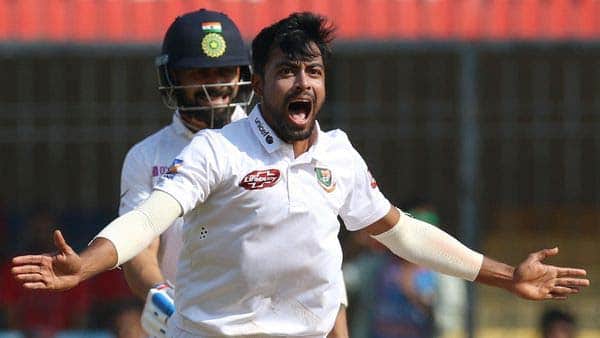 After a crushing defeat in the opening Test in Indore, Bangladesh fast bowler Abu Jayed has revealed that he sought inspiration from Indian speedster Mohammad Shami in a bid to further improve his bowling ahead of the upcoming second and first pink-ball Test between the two sides.

The 26-year-old Bangladeshi bowler was one of the few shining lights for the visitors in the opening match, which India went on to win by an innings and 130 runs at Holkar Stadium to take a 1-0 led in the two-match series.

Jayed bagged four wickets, including crucial wickets of Virat Kohli and Cheteshwar Pujara, during India's only innings of 493 for six. However, in order to improve his performance further, the Bangladesh bowler went to India's best bowler in the first Test, Mohammad Shami, for inspiration.

Jayed revealed that he paid extra attention to how Shami was bowling in the nets and realised that he could also bowl like the Indan pacer.

"I spoke with [Mohammad] Shami bhai yesterday [Saturday]. There are some similarities between him and me since we both use the seam. I have seen him bowl a lot of times and I paid extra attention to how he was bowling. I have compared his height to mine to find out if he is taller than me or of equal height. Then I figured maybe I could bowl like him," the Internnational Cricket Council (ICC) quoted Jayed as saying.

Shami’s bowling figures of three for 27 and four for 31 lifted him eight places to reach career-best seventh position in the ICC Test rankings.

Talking about his preparation for the pink-ball Test, Jayed said that they need to measure the amount of movement the ball gives off and also want to get a hold of the amount of swing that the pink ball offers.

'My brother got me a pink ball from England some 8-10 months ago. That was the first time when I saw a pink ball in person. I did not have the opportunity to bowl with it but I did some seaming. I still have that ball at home. Our squad did have a practice session with the pink ball back at Dhaka but I was playing at NCL (National Cricket League) at that time," he revealed.

"Today we have a practice session, after bowling with it I will understand the difference. I will discuss about our strategy [with the pink ball] with my coaches. As the ball is a new one, we also need to measure the amount of movement the ball gives off. I should also get a hold of the amount of swing that is on offer," the Bangladesh bowler added.

India will look to complete a series whitewash against Bangladesh when they lock horns in the second Test, beginning November 22 at Eden Gardens.