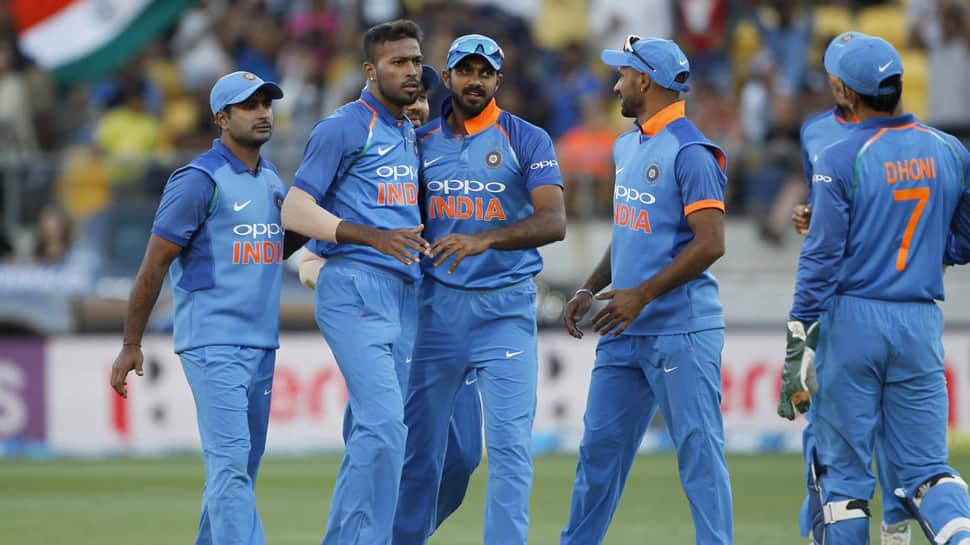 India overcame a disastrous start to earn a hard-fought 35-run win over New Zealand in the fifth ODI Sunday to finish the series with a 4-1 scoreline in their favour, proving the heavy loss at Hamilton was an aberration.

Hardik Pandya's 45 off 22 balls also went a long way in India posting a challenging target and his two wickets, later on, showed why he is such an important member of the team.

New Zealand batsmen, including skipper Kane Williamson (39), squandered their starts in the chase but the home team remained in the contest until Jimmy Neesham (44 off 32) was dismissed in the 37th over.

His freak run out, which was affected by the ever so sharp Mahendra Singh Dhoni from behind the stumps, came after a lbw appeal was turned down. New Zealand eventually ended with 217 in 44.1 overs despite Matt Henry's unbeaten 17 off 9 in the final overs.

Irrespective of the game's outcome, Rayudu played one of the most significant knocks of his career and made a compelling claim for a World Cup spot.

At the toss, skipper Rohit Sharma called the eight wicket loss in the previous game 'humiliating' and embraced the challenge of batting on a testing surface by opting to bat.

Pacer Henry was the standout bowler for the hosts, taking four wickets for 35 runs while Trent Boult picked up three for 39.

After being bowled out for a paltry 92 in the fourth ODI, India had a point to prove.

The visiting team made three changes in the playing eleven. A fit-again Dhoni was back in the team in place of Dinesh Karthik while Mohammad Shami and Shankar replaced Khaleel Ahmed and Kuldeep Yadav. The chinaman bowler was rested from the game.

The ball swung at the Westpac Stadium, like it did at Hamilton, and troubled the Indian batsmen, including the experienced opening pair of Rohit and Shikhar Dhawan.

Boult, who took five wickets on Thursday, and Henry swung the ball at express pace and shared two wickets each to leave India reeling at 18 for four in seven overs.

It was a combination of top-class fast bowling and questionable shot selection that led to the top-order failure. Rohit (2) was outdone by a beauty from Henry, the one that moved away from the middle stump line to dislodge the off-stump.

Dhoni (1), playing Sunday's match after the missing the last two games due to injury, was bowled by Boult, off a peach of a delivery that swung back sharp and late to take the Indian wicketkeeper's off-stump.

On the other hand, Dhawan (6) slashed one hard to be caught at third man while the young Shubman Gill (7), getting his second game of the series, scooped a simple catch to the cover fielder.

Just when India looked down in the dumps, Rayudu and Shankar showed admirable fight to weather the storm and lead India's recovery. Initially in the partnership, Shankar looked more comfortable while Rayudu focused on blocking.

The Tamil Nadu all-rounder was sent ahead of Kedar Jadhav at number six, indicating the team management's faith in his abilities. It was unfortunate for Shankar to miss out on a well-deserved fifty as he got run out after a mix-up with Rayudu.

Rayudu at the other end began to play his strokes and hammered Colin de Grandhomme for two consecutive boundaries to bring up his 10th ODI fifty. A little later, he smashed Colin Munro for successive sixes before he perished while trying to hit another one out of the park. Rayudu's crucial knock comprised eight fours and four sixes.

Pandya then took the centre stage after Rayudu's fall and once again showed what he brings to the table late the innings.

Pandya's brute power was on full display when he whacked leggie Todd Astle for three sixes in as many balls. The all-rounder did not even spare the in-form Boult, pulling him over mid-wicket for another maximum. His cameo included two fours and five sixes.