India beat New Zealand in the first of the three T20Is on Wednesday (17 November) by five wickets. 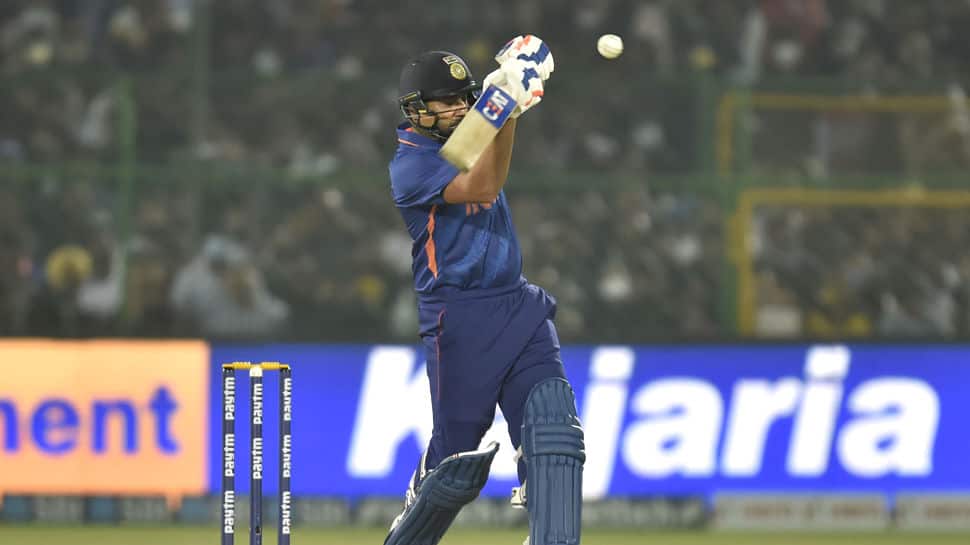 Jaipur: Suryakumar Yadav (62) and Rohit Sharma (48) starred with the bat as India chased down 165 to defeat New Zealand by five wickets in the first T20I of the three-match series here at the Sawai Mansingh Stadium on Wednesday.

Chasing 165, India got off to an excellent start as openers Rohit Sharma and KL Rahul put on 50 runs inside the first five overs.

However, the introduction of Mitchell Santner paid off as he dismissed Rahul (15) on the first delivery of the sixth over.

Despite a commendable effort from New Zealand in the death, India clinch a thriller in the final over to take a 1-0 lead in the three-match #INDvNZ T20I series. pic.twitter.com/Da2LKSNKrU

Suryakumar Yadav then joined Rohit in the middle and the duo took the hosts` score to 85/1 at the halfway mark, still, 80 runs away from the target.

Rohit and Suryakumar kept on chipping away at runs, and the hosts were in firm control of the game.

New Zealand got the much-needed breakthrough in the 14th over as Trent Boult got the better of India skipper Rohit (48). Suryakumar kept on going on his merry way and he brought up his half-century off just 34 balls.

India was in a comfortable position but the quick wickets of Suryakumar (62) and Shreyas Iyer (5), saw the hosts needing 10 runs to win off the final over.

Daryl Mitchell was chosen to bowl the final over, and in the end, Rishabh Pant (17*) and Axar Patel (1*) managed to take India over the line.

Earlier, Martin Guptill and Mark Chapman played knocks of 70 and 63 respectively as New Zealand posted a total of 164/6. Asked to bat first, New Zealand got off to the worst start possible as on just the third ball of the innings, Daryl Mitchell (0) was clean bowled by Bhuvneshwar Kumar.

Mark Chapman then joined Martin Guptill in the middle and the duo took New Zealand`s score to 41/1 after the end of the powerplay.Chapman and Guptill kept on moving the scoreboard slowly and steadily, and at the halfway mark, the Kiwis score read 65/1.

In the 11th over bowled by Mohammed Siraj, Guptill changed the tempo as he smashed 16 runs, giving the much-needed momentum to the Kiwis.

Chapman also went on to register his half-century and the visitors were looking in firm control.Chapman finally departed after playing a knock of 63 and he was sent back to the pavilion by Ravichandran Ashwin.

In the very same over, Ashwin sent Glenn Phillips (0) back to the pavilion, reducing Kiwis to 110/3 in the 14th over. In the final four overs, New Zealand managed to add 34 more runs, taking the score past the 160-run mark.