After wrapping up Bangalore for a paltry total of 70 runs, the sixth-lowest total in the IPL history, the hosts took 17.5 overs to overhaul the target on a slow Chepauk wicket. 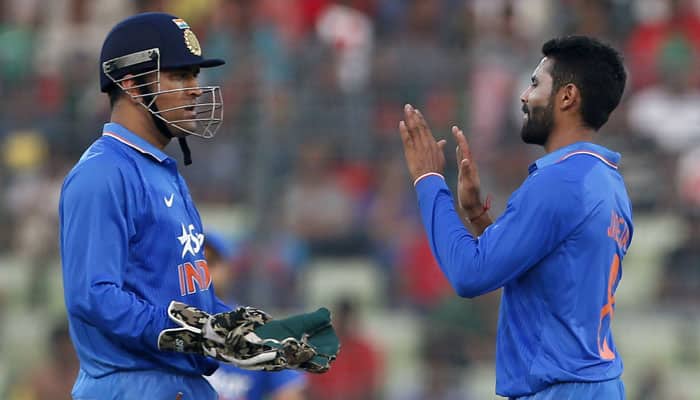 After wrapping up the visitors on a paltry total of 70 runs, the sixth-lowest total in the IPL history, the hosts took 17.5 overs to overhaul the target on a slow Chepauk wicket.

Chasing a low total seemed a child`s play for Chennai, however, the Bangalore bowlers also utilised the favourable conditions to create little panic in hosts` dug out.

Like Bangalore, Chennai was also off to a poor start as Yuzvendra Chahal sent back opener Shane Watson who failed to open his account.

Incoming batsman Suresh Raina (19) and opener Ambati Rayudu slowly and steadily lifted their side towards the target before Moeen Ali applied brakes on the former`s innings.

The duo was involved in a 32-run stand for the second wicket. Meanwhile, Raina also became the first player in the IPL history to reach the 5,000-run mark. As soon as he reached an individual score of 15, Raina achieved the rare feat.

With 11 runs remaining to win, Mohammed Siraj came with another breakthrough as the pacer clean bowled a well-settled Rayudu on 28.

Ravindra Jadeja (6 not out) and Kedar Jadhav (13 not out), however, denied the visiting bowlers any further inroads in Chennai batting line-up as they comfortably collected the remaining runs to hand the defending champions a comfortable win.

For Bangalore, Chahal, Siraj and Moeen picked a wicket each.

Earlier, an exceptional bowling effort by Chennai saw Bangalore succumbing at a meagre total of 70 runs.

Such was the dominance of Chennai bowlers that half of the Bangalore batsmen were back to the dressing room with just 45 runs on board in 9.2 overs.

First of all, off-spinner Harbhajan Singh (3/20) rattled the visiting top order before Imran Tahir (3/9) joined the party, rocking the middle-order while Jadeja (2/15) also jolted Bangalore on a couple of occasions.

Put to bat first, Bangalore openers Virat Kohli (6) and Parthiv Patel started cautiously. However, the visiting skipper while trying to pull a shorter delivery from Harbhajan handed an easy catch to Jadeja at deep midwicket.

Soon, the visitors lost their fourth wicket as newcomer Shimron Hetmyer tried for a quick single. As there was no response from his partner Parthiv and the former was stranded in the middle. Raina, who was at cover, took no time and hurled the ball to Dhoni who got ample time to knocks off the bails.

Tahir was the next to strike as a Shivam Dube thick edge on his delivery landed safely in the hands of Watson at slip and Bangalore were reeling at 45/5.

With just the addition of five runs, it was Jadeja`s turn, who dismissed Colin de Grandhomme (4) before Tahir struck twice in quick succession as Bangalore`s scorecard read 59/8.

It was a cakewalk for the Chennai bowlers then as Jadeja accounted for the wicket of Umesh Yadav and Dwayne Bravo put the final nail in the coffin by sending back Parthiv to wrap up Bangalore innings.

Parthiv was the top scorer for Bangalore with 29 runs as none other than him was able to reach the double-digit score.