In the encounter against Barbados Royals, Chris Gayle managed to put just 12 on the scoreboard but his short stay saw one gigantic hit, which soon became a social media buzz. 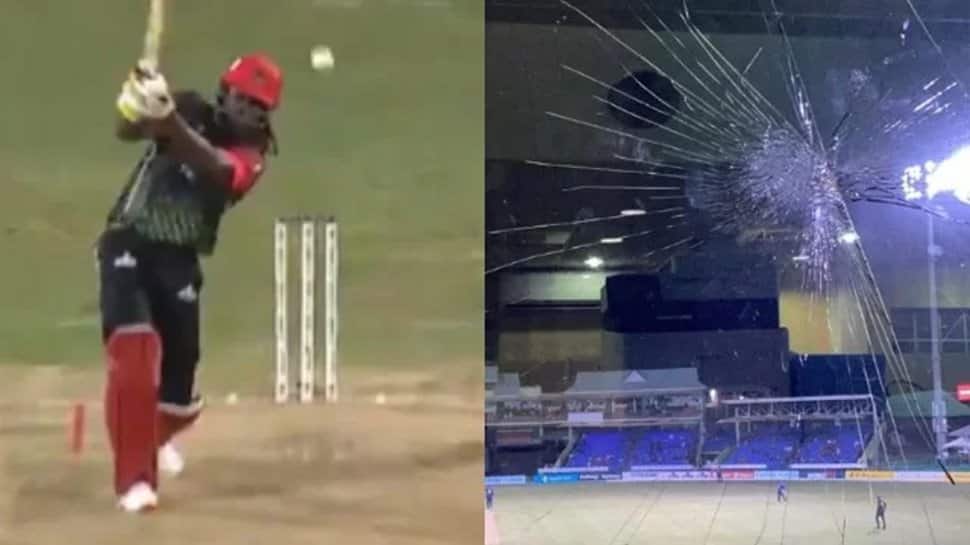 Chris Gayle is once again in the news and the reason cannot be any different then his six-hitting prowess. The self-acclaimed 'Universe Boss', who is currently engaged with St Kitts and Nevis Patriots in the ongoing Caribbean Premier League (CPL) 2021 smashed the ball straight over the bowler's head but in the process also smashed a window pane.

In the encounter against Barbados Royals, Gayle managed to put just 12 on the scoreboard but his short stay saw one gigantic hit, which soon became a social media buzz.

The incident took place in fifth delivery of fifth over, when Gayle made some room for himself and smashed a short of a length delivery pitched just outside the off stump over Jason Holder's head for a biggie. However, his shot saw the ball travel straight into the window above the sidescreen and shattered the glass.

The Patriots eventually went on to win the contest by 21 runs after some vital knocks from Sherfane Rutherford and skipper Dwayne Bravo.

"Not a bad bowling effort. Pretty good with the new ball. Oshane Thomas was brilliant. Probably gave 20 runs too many in the end. Bravo and Sherfane batted so well. It’s not a surprise to me (to see Oshane Thomas do well). We have seen what he can do. The powerplay is crucial. I thought we had a good powerplay. Two crucial runouts," Holder said.

"I was just trying to play the ball on merit with a clear mind. Once we bat deep, we know we can capitalize. I will give a lot of credit to Sherfane for the way he batted. It’s the players, it’s the ability of the players to do well. He (Drakes) has the skills, he has the ability. I saw him in the nets. We know he is going to have a good future for West Indies," Bravo said.