Sanjeev Chawla made this startling disclosure in his statement given to the Crime Branch of Delhi Police. 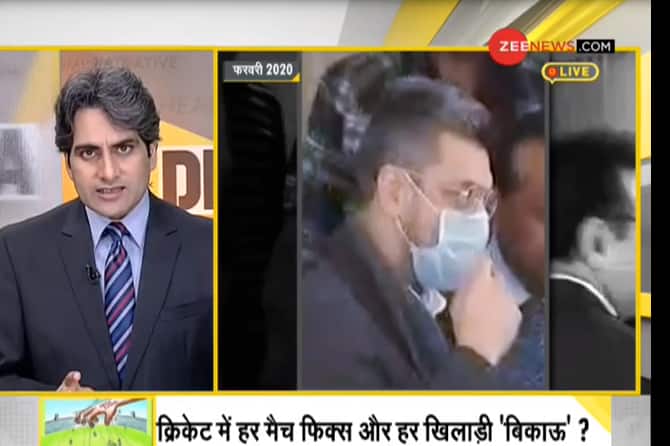 New Delhi: This news development may shake your faith among cricketing stars whom you hold in high esteem. These stars allegedly follow a script prepared by bookies who fix the matches and the 22 players enact the role assigned to them, according to a statement given by Sanjeev Chawla, who was brought to India from London on the charges of match-fixing.

Sanjeev Chawla made this startling disclosure in his statement, in possession of Zee News, given to the Crime Branch of Delhi Police. Chawla, who is a big name in the world of match-fixing, has stated that all the cricket matches are fixed, the same way, as a film is first scripted and then directed.

He is understood to have said that the betting racket includes Syndicate as well as Underworld, and people involved are very dangerous and those who utter against them are eliminated. Sanjeev Chawla has also stated that the life of Investigating Officer Dr G Ram Gopal, Deputy Commissioner of Police, Crime Branch, is also under threat. DCP G Ram Gopal is the police officer who along with his team brought Sanjeev Chawla from London to India.

Initially, Hansie Cronje denied any match-fixing but later confessed to having committed this mistake, and subsequently, he was banned for life. Later, some players from South Africa, including Herschelle Gibbs, were punished but none got as big a punishment as Hansie Cronje. Hansie Cronje died in a plane crash in 2002.

The Delhi Police had registered an FIR in the case in the year 2000 but the charge sheet was filed after 13 years i.e. in 2013. Sanjeev Chawla could be brought to India in February this year after 20 years of hard work. This simply shows how powerful people are involved in this match-fixing racket.

Chawla's lawyer, however, claimed that Sanjeev has not given any such statement and that it is a concocted story floated by the Delhi Police.

Barring the legal aspect of the case, this report deals with the spirit behind cricket that gives the players a status of superstars. If the statement of Sanjeev Chawla holds any truth then it would give a severe jolt to cricket fans who rever this game like a religion.

According to a survey conducted by the International Cricket Council (ICC) in the year 2018, the number of cricket fans in the world is 100 crores and 90 percent, 90 crores, of them are Indians. The survey covered fans aged from 16 to 69 years, and their average age was 34 years.

This revelation can be dismissed as it was stated by a bookie involved in the match-fixing. Notably, this betting racket is not limited to the era of Hansie Cronje and Chawla. Rather, the match-fixing has been a part of cricket since the 90s, and most of the Cricket Board have been trying to protect them rather than freeing the board from this corruption.

Zee News today also spoke to Alok Kumar, retired joint commissioner of Delhi Police's Crime Branch, about this nexus, as he was the first to investigate the matter.

You will be surprised to know that more than 100 crore people watched the India-Pakistan match in the Cricket World Cup. This number is 9 times more than those who watched the annual championship of America's most famous National Football League.

More than a sport, Cricket is also a means of diplomacy. On the pretext of cricket, countries like India and Pakistan try to resolve their disputes. Not only this, a few years ago, Cuban leader Fidel Castro also advised the Cuban people to play cricket instead of baseball to give a befitting reply to America, where baseball is the most popular sport.

China got built cricket stadiums in the West Indies countries that refused to recognize Taiwan, just to repay the favour.

Cricket also contributed in a positive way in normalizing the lives of the people of Afghanistan, which faced several years of war. The popularity of cricket in Afghanistan is so much that people there do not participate in elections but they never miss any match of their cricket team.

Cricket was expanded to different countries of the world during the British Empire era and it also reached India. Earlier, it was also played in America, but after the end of British rule, Americans started playing Base Ball.

India has now emerged as an unchallenged leader of this sport. The Board of Control for Cricket in India (BCCI) gets 70 percent of the cricket revenue earned from all over the world.

Events like IPL have made the popularity of cricket reach at its apex. When global companies are facing difficult situations due to the Coronavirus crisis, the BCCI is still in profit.