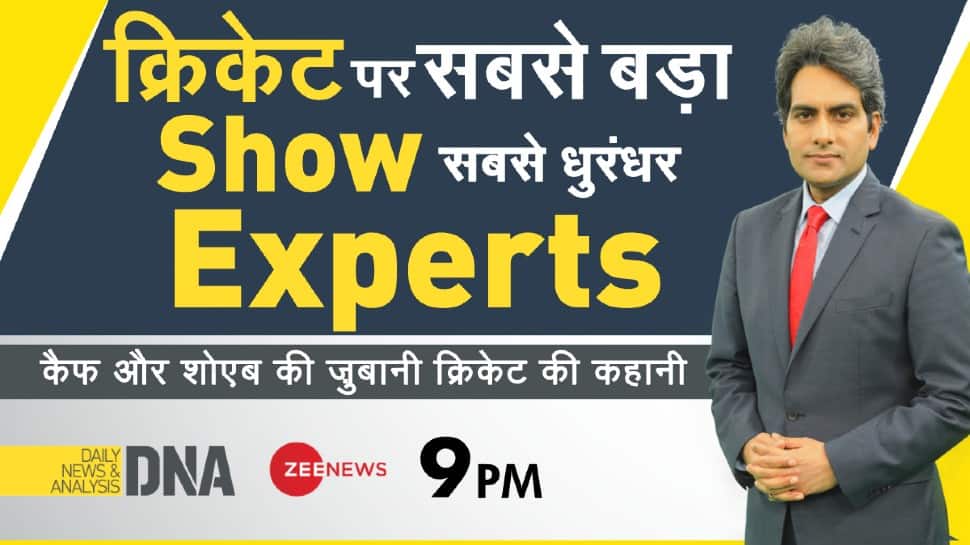 New Delhi: Ahead of the T20 World Cup 2021 match between Indian and Pakistan, former cricketer Mohammad Kaif and his rival Shoaib Akhtar come together to share their invaluable insights, wonderful experiences, and some lesser-known facts, one of which reveals a wonderful trivia about the master blaster Sachin Tendulkar.

The discussion started on a contentious note as Chaudhary pointed out that there were many who do not want the match between India and Pakistan to happen at all. To this, Akhtar, who joined from Islamabad through video conferencing, replied that the situation in Pakistan was quite different from that in India.

Akhtar said, “When you watch Indian TV news channels other than Zee News, it appears as if there is going to be a war tomorrow. This doesn’t happen in Pakistani channels. India is not an issue here at all. But in India, Pakistan is used as a political tool. It even becomes an issue in elections."

“In Pakistan, people like and appreciate Indian cricketers. They praise Virat Kohli, they like Rohit Sharma even more. They call him India’s Inzamam,” he added.

Chaudhary immediately pointed out saying there are many in Pakistan who keep talking about India. “Ramiz Raza recently accused BCCI of enjoying undue influence. Even Pakistan’s PM Imran Khan talks about (Indian PM) Modi,” he said.

“Yes, but our media doesn’t do it. There may be a few exceptions,” Akhtar defended.

Akhtar further said, “I have seen the India which is vast, liberal with large-hearted people. People love me here.”

Kaif asserted that the Indian team looks on paper and is in a strong position to win the upcoming match.

“Historically, India has always won these (World Cup) matches. But it depends on how the players perform on match day. The Indian side has an advantage that they just played the IPL in UAE and are accustomed to the conditions. Players are also in form. It would be a shocker if Pakistan wins. Of course, anything can happen in T20, but on paper, India appears to be a much stronger team,” said Kaif.

Akhar countered this saying, “Big matches are not won by big players but by big courage. No doubt, India has better players, but with courage and right strategy things could turn out to be different than expected. Also, T20 is a tricky format. It’s going to be a 50-50 game. It will depend on how the players perform on the given day.”

When asked if the India Vs Pakistan match fever has reached its peak in Pakistan, Akhtar played it down saying they are more concerned about the Kiwis at this point.

“We are in fact, more angered at New Zealand for the way they insulted us by abandoning the tournament. It was demoralising,” he said.

Akhtar also clarified on the media reports which claimed that he had written in his book that Sachin Tendulkar’s game had shortcomings and that he was a bit afraid of facing him.

“This was just media hype. I just mentioned that as Sachin was struggling with tennis elbow, I thought I could trouble him by bowling high so that he struggles to pull. And in this way, I would try to scare him, trap him. I never said Sachin fears me,” Akhtar asserted.

He went on to recall a meeting with Tendulkar and revealed something he “had never told anyone”.

“When I visited Sachin’s home and tried to clarify the book controversy, he shrugged it off. He instead told me that during the Guwahati match when I struck him in his abs, his rib was fractured and he still continued to play. He said he was struggling to breathe but continued playing. He later found out that night about the fracture. Such was the character of that man,” Akhtar said.

He then revealed why he thinks Sachin is one of the greatest players.

“Sachin is one of the greatest players. He has played against the likes of McGrath, Shane Warne and then 10 years later he faced another generation of players such as Brett Lee and me. Had he played in the present era, he would have scored at least a lakh runs,” he said.

When it came to picking his favourite player in the Indian side, Akhtar was quick to name Rohit Sharma.