With 11 points, India are now almost through and another win in their next three games will seal their position in the top four as West Indies were knocked out with two games remaining. 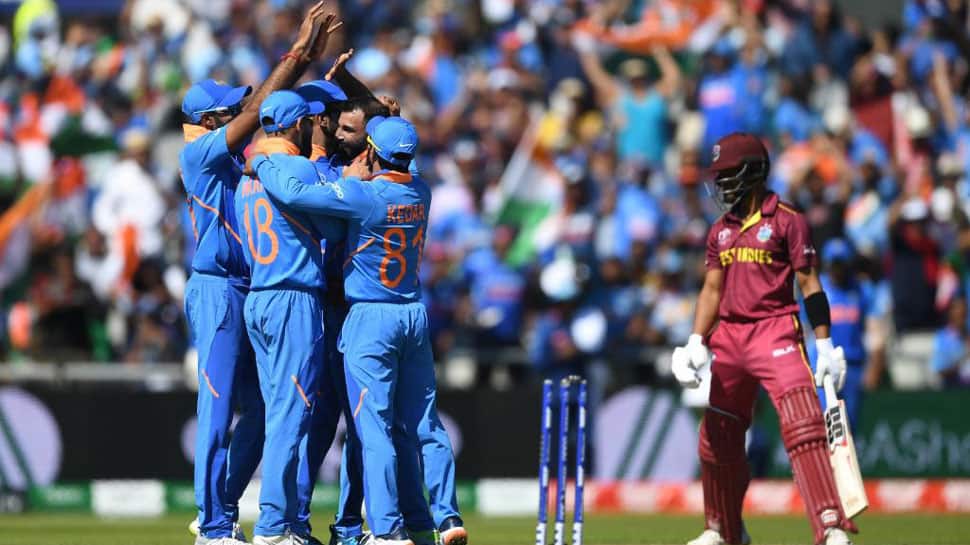 Indian bowlers led by the deadly Mohammed Shami produced yet another splendid performance to put their team on the cusp of a semi-final berth with a 125-run rout of the West Indies in their sixth World Cup encounter on Thursday.

With 11 points, India are now almost through and another win in their next three games will seal their position in the top four as West Indies were knocked out with two games remaining.

In two successive matches now, the bowlers have more than covered up for a mediocre show from the batsmen, save skipper Kohli.

Shami (4/16 in 6.2 overs) was at his best in the first spell as he first bounced Chris Gayle out and then bowled an off-cutter to remove Shai Hope.

In his second spell, he got Shimron Hetmyer while new ball partner Jasprit Bumrah (2/9 in 6 overs) was fast and accurate getting two wickets off successive deliveries.

Kuldeep Yadav (1/35 in 9 overs) and Yuzvendra Chahal (2/39 in 7 overs) were too hot for the Caribbean batsmen on a track, where run scoring became increasingly difficult with the passage of time.

The last seven wickets fell for 63 runs in a space of 14 overs which indicated the Caribbean plight.

Bhuvneshwar Kumar with his incisive swing bowling has always been Chris Gayle's (6 off 19 balls) nemesis but it was in-form Shami, who drew the first blood with a short ball that climbed on the big man and the mistimed pull was taken by Kedar Jadhav, running sideways from his mid-on position.

Hope, West Indies' next big hope, got one from Shami that came in breaching his defence.

Sunil Ambris (31, 40 balls) and Nicholas Pooran (28 off 50 balls) steadied the ship with a 55-run stand before both were dismissed in quick succession.

The skipper Jason Holder then played a rank bad shot off Chahal as the West Indies were knocked out of the contest at the halfway stage, reeling at 98 for five.

When India batted, Dhoni scratched around for the better part of his innings before exploding in the final over to take India to 268 for 7 on a track that looked good for batting.

There has been a lot of talk about Dhoni's failure to rotate the strike and Thursday's batting effort on another dry and slow track will only amplify the criticism before he got 16 in the final over to finish on 56 off 61 deliveries with three fours and two sixes.

More than his strike-rate, his percentage of dot balls remains a concern for India. If India played 152 dot balls against Afghanistan, the count was 163 in this game.

It was Pandya, whose 46 off 38 balls took India past the 250-run mark after skipper Kohli scored his fourth half-century. The middle-order looked jittery again with skipper Kohli not getting enough support from the other batsmen.

In fact, Dhoni's rustiness rubbed off a bit on the Indian captain, who ultimately gifted his wicket. Kohli hit eight boundaries with his stand-out shot being a lofted drive over covers off Oshane Thomas.

Veteran Kemar Roach (3/36) bowled fast and fuller length deliveries using the off-cutters to good effect while skipper Holder (2/33 in 10 overs) was economical, troubling the batsmen with back of the length deliveries.

Left-arm spinner Fabian Allen (0/52 in 10 overs) didn't get any wicket but a crucial aspect of his spell was the last five overs in which he gave away only 15 runs. This was another left-arm spinner after Mitchell Santner and Shakib Al Hasan, who has now troubled Dhoni with his wicket-to-wicket bowling.

When Holder and Roach bowled fast and back of length, the former India captain found it difficult to manoeuvre the bowling but the final score turned out to be much above par.