This will be New Zealand’s second final of the showpiece event and England’s fourth, with a win for either side ensuring the nation its first cricket World Cup title. 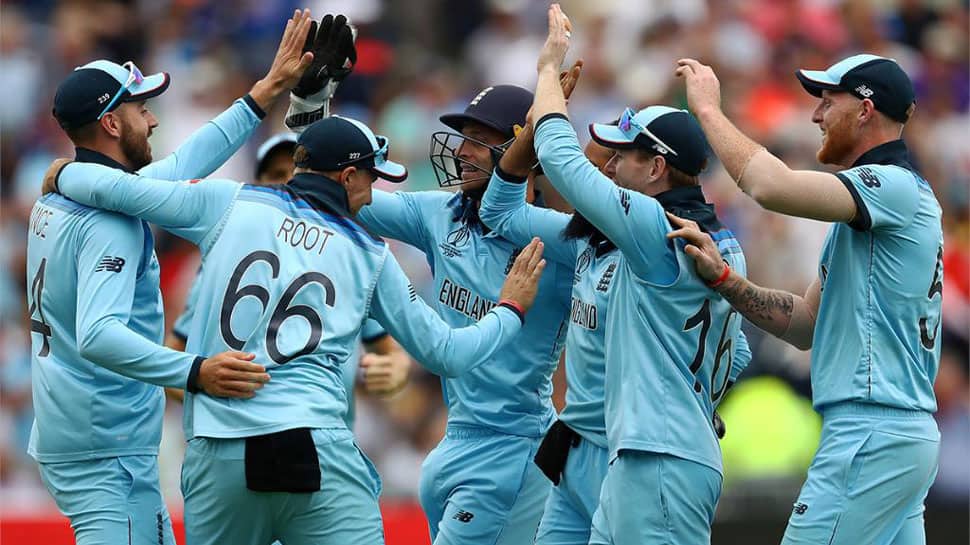 BIRMINGHAM: For the first time in 23 years, a new World Cup winner will be crowned. Joining New Zealand in the final of the World Cup 2019 at the iconic Lord’s stadium on Sunday will be hosts England, after they beat Australia comprehensively by eight wickets with almost 18 overs left in the second semi-final at Edgbaston. This will be New Zealand’s second final of the showpiece event and England’s fourth, with a win for either side ensuring the nation its first cricket World Cup title.

Steve Smith continued his sublime form in World Cup knockouts, top-scoring for Australia with 85. Four times he’s now scored a half-century in WC KOs and taken his tally to 311 runs from four innings. Yet, it couldn’t prevent Australia’s first-ever World Cup semi-final loss. Their hopes of defending 223 rested on the shoulders of Mitchell Starc and Jason Behrendorff producing a repeat of Lord’s, whereas England’s chances of chasing down the total replied on Jonny Bairstow and Jason Roy‘s. In a battle of pairs, it was “Roystow” who came out on top, and in some manner too.

In the first seven overs, Australia had England working hard for runs, but even that could attribute to the fact that England played Starc and Behrendorff cautiously. In seven overs, Bairstow and Roy had already forged the biggest partnership of the knockouts. The period of blocking was cut short by an insane flick for six from Roy off Starc, followed by a whip of Cummins towards deep fine leg.

Having played out 10 overs for 50 runs, which in itself was pretty good knowing the modest target, the next nine bled 91 with Roy going into overdrive. England’s world-beating combination, hungry for runs took off and simply did not look like being stopped. The way Roy and Bairstow treated Starc in particular was almost a first. Swat, jab, thud, bang, thwack. Add all the sound effects to sum up England’s merciless pounding of Australia’s bowlers. England were bossing Australia.

In order to shake things, up Smith was given the ball. Roy welcomed him with a hat-trick of sixes, one almost slamming against the thick glass walls of the press box. A crunching boundary off Starc brought up Roy’s half-century. Bairstow, who was striking the ball equally well to move to 34 off 43, was down after twisting an ankle, but got up as he and Roy brought up their 11th century stand in ODIs.

Bairstow wasted a review when Starc had him trapped in front. England could have really done with it since Roy was at the receiving end of an umpiring howler. Roy went for a pull down leg and umpire Kumar Dharmasena raised his finger, when there was clear daylight between bat and ball. But since England had no reviews left, a fuming Roy took off mouthing a few words.

Joe Root, who had begun with three crisp fours off one Starc over, moved back to nudging the balls in the gaps but Eoin Morgan took the aggressor’s role. Nathan Lyon was repeatedly swept and Behrendorff, Starc and Pat Cummins were cut and pulled fiercely. With two needed, Morgan thumped Behrendorff to trigger pyrotechnics across the Edgbaston cricket ground.

Conditions at Edgbaston were nothing like Manchester. There was no cloud cover and neither was the surface deteriorating and slow. The sun was out in all its glory and the surface was considered a belter. Yet, Australia, batting first lost their top three batsmen for 14 on board. David Warner hit a first-ball four, but for the next two hours, it was one way-traffic for England.

Smith staged a tremendous fightback for Australia batting almost till the very end, and along the way formed crucial partnerships. With Alex Carey, who pushed through the pain barrier after a brutal blow to the chin by Jofra Archer, Smith added 103 runs and led a spirited Australian revival. But England pulled things back remarkably through Adil Rashid and Chris Woakes, who returned impressive figures to bowl Australia out.

Once again walking out to a clattering of boos, Warner struck a delightful cover but it was England who drew first blood. First ball from Archer rapped Aaron Finch on the pads the Australia captain was out for a golden duck. The boos for Warner turned into cheers for Woakes when the batsman nicked him away from his body to Bairstow at slip.

Peter Handscomb, hung around for 12 balls before being cleaned up by Woakes. At 14/3, these were shades of India a day earlier at Old Trafford, but Smith and Carey’s resolute partnership proved to be the difference. Bit by bit, they worked their way to runs ensuring they go behind the line of the ball. Smith was 7 off his first 34 balls but picked up pace to score his next 28 runs off 20.

Batting cautiously, Smith and Carey brought up the 50-run partnership for the fifth wicket off 73 balls. The highlight of the stand was Carey’s supreme grit. He was pinned by a rising Archer delivery; the impact was such that his helmet came off at the time of contact.

But with a wraparound bandage around his face, Carey carried on, despite his chin beginning to bleed and face starting to swell up. Four balls after he copped the blow, Carey tucked into a delightful cover drive before bringing out a sweep off Rashid.

Rashid’s twin blow pegged Australia back. Morgan’s faith in Rashid had remained unshaken in the tournament, and this is when his numbers prior to the second semi-final had read eight wickets at an average of 56.12. There were also whispers of a troubled shoulder. But Rashid dispelled those doubts in a matter of three balls. Carey holed out at deep mid-wicket to a slog sweep and Marcus Stoinis was done in by a ripper of a googly for a second-ball duck.

In between those two wickets, Smith had completed his fifty off 72 balls. Australia’s twinkle-toed genius held one end and played anchor. When the boundary balls were on offer, Smith ensured those didn’t go unpunished.

Maxwell swatted Ali over long on and threw the kitchen sink to a half-tracker. Estimating a short ball, Archer was nailed with a brutal pull but with a little bit of variation, the England quick pitched in a slower ball and a good length that removed Maxwell. Rashid then, bowling his final over, had Cummins edging to Root, who held on to a smart catch at first slip.

Smith and Starc added 51 in less than 10 overs, and threatened to get a few more, maybe steer Australia towards that 250-run mark, before a Jos Buttler’s direct hit run Smith out. Woakes removed Starc the very next ball caught behind and Mark Wood knocked over Behrendorff.