England Lions pull off consolation win against India A

Buckett's knock, which includes 10 fours and a six, helped the visiting team overhaul India A's score of 121 all out in 35 overs, amid mounting tension. 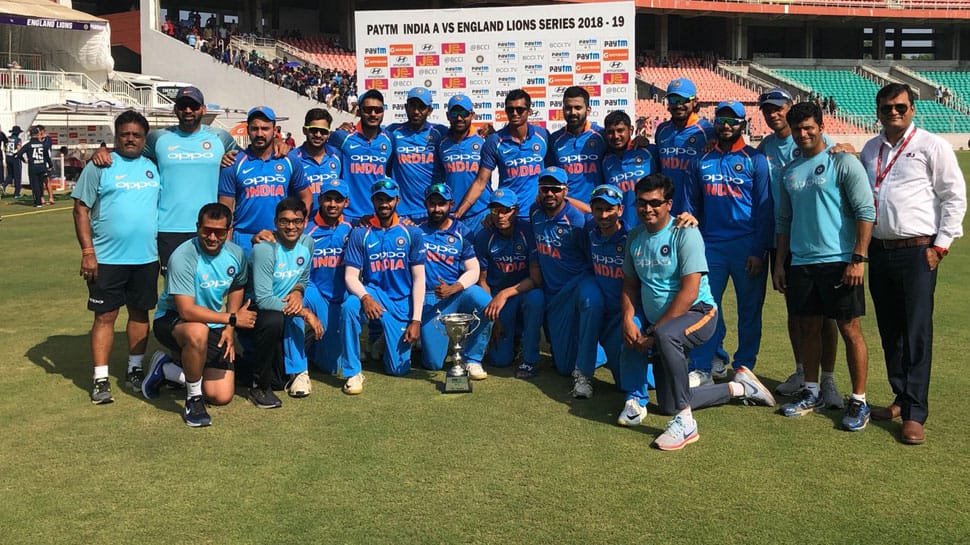 Ben Duckett starred with an unbeaten 70 as England Lions pulled off a narrow one-wicket win over India 'A' in a low-scoring fifth and final match of the unofficial ODI series on Thursday to prevent a clean sweep by the hosts.

The hosts who had emerged victorious in the previous four matches, went on to lift the trophy despite the defeat on Thursday.

Buckett's knock, which includes 10 fours and a six, helped the visiting team overhaul India A's score of 121 all out in 35 overs, amid mounting tension.

Earlier, opting to bat after skipper Ankit Bawne won the toss, the India 'A' batsmen found the going tough on a wicket aiding the bowlers.

KL Rahul (0) who struggled in the previous two matches of the series, was dismissed off the first ball of the match. He was bowled by right-arm paceman Lewis Gregory for a duck to continue his run of low scores.

Test specialist Rishabh Pant, who was picked in the squad to enable him get some time in the middle ahead of the T20 series in New Zealand, fell for a 14-ball 7 to seamer Jamie Overton.

Mumbai batsmen Lad held firm even as wickets tumbled around him, hitting seven boundaries in his 40-ball knock, before nicking one to 'keeper Alex Davies of Overton.

At 72 for 7, India 'A' was in danger of being bowled out for less than 100 before Patel and Deepak Chahar (who hit two fours and a six) added 30 runs for the 8th wicket.

Pace bowler Overton was the most successful Lions bowler with 3 for 24 while fast-medoum bowler Tom Bailey took two wickets.

In reply, England Lions lost opener Will Jacks (6) in the second over as Deepak Chahar had him caught by Lad.

Tight bowling by the Chahar brothers - Deepak (3 for 25) and leg-spinner Rahul (3 for 43) and Axar Patel (2 for 22) meant the English team had trouble in reaching the small target.

The visiting captain Sam Billings, who has had a good run in the series, fell for 8 to Deepak Chahar.

Left-handed Duckett, who played four Tests before finding himself on the sidelines, battled hard and kept his cool even as the other batsmen failed to cope against some good bowling from the Indians.

He hit 10 fours and a six in his knock and enabled the Lions secure a consolation win in the company of the No.11 Tom Bailey (1 not out).

The teams will next play a two-match series of unofficial tests, starting on February 7 in Wayanad.