Batsman Shai Hope and fast bowler Alzarri Joseph have been dropped from the West Indies squad for the T20I series against the Men in Blue. 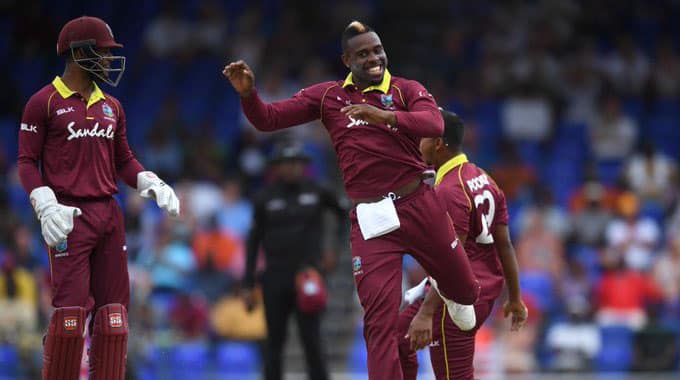 Left-arm spinning all-rounder Fabian Allen has been recalled in the 15-member West Indies T20I squad for the upcoming three-match series against India, beginning December 6 at the Rajiv Gandhi International Stadium in Hyderabad.

The 24-year-old was earlier forced to miss the second and third T20I against Afghanistan due to a knee injury which he sustained during the opening match. He has now recovered fully and is all set to rejoin the national squad.

Meanwhile, wicketkeeper-batsman Denesh Ramdin has also been called back in the Caribbean side after he has recovered fully from a hamstring niggle.

Batsman Shai Hope and fast bowler Alzarri Joseph have been dropped from the West Indies squad for the T20I series against the Men in Blue.

Besides the T20I squad, West Indies have also named the ODI squad for the three-match series against India, starting from December 15 at M.A. Chidambaram Stadium in Chennai. The Caribbean side  has retained the same squad that recently swept Afghanistan 3-0.

Swashbuckling batsman Chris Gayle is the most notable absentee from the ODI squad after he decided to take a break from the game for the remainder of the 2019 season in order to utilize the time to "reflect" on his future in international cricket.

Keiron Pollard will continue to lead the two sides in the upcoming limited-overs fixtures against the Virat Kohli-led side.

Reflecting on the squad, West Indies head coach Phil Simmons said the national selectors are trying out different combinations and giving chance to new talent ahead of the 2020 ICC T20 World Cup.

"In the T20s this will be another chance for them to play and develop ... The next ICC T20 World Cup is in Australia and the one after that is here in India so there is a lot of preparation to be done, first for Australia. Wehave given the players here a chance in this series and we know we have players outside who may be coming in later on as well, so it's good to give those here another opportunity," the ICC quoted Simmons as saying.