Australian fast bowler Josh Hazlewood has been ruled out of the rest of the ongoing day-night Test match against New Zealand at the Optus Stadium in Perth due to a hamstring injury. 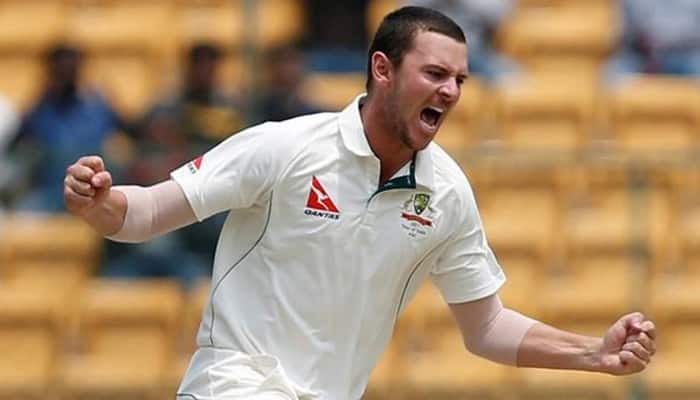 Australian fast bowler Josh Hazlewood has been ruled out of the rest of the ongoing day-night Test match against New Zealand at the Optus Stadium in Perth due to a hamstring injury.

The 28-year-old picked up the injury after bowling just eight deliveries on the second day of the ongoing match before he was forced to walk off the field.

An MRI scan now revealed that Hazlewood has suffered a left hamstring strain and that he would now miss the rest of the Perth Test against New Zealand. The injury means the pacer is now also doubtful for the second Test of the three-match series between the two sides, beginning on Boxing Day (December 26) at the Melbourne Cricket Ground (MCG).

Reflecting on the injury, Hazlewood had earlier allayed concerns about his injury before the start of play on the third day.

"It's a bit sore this morning.I knew as soon as I did it that there was a tear there. It's not too bad so we'll play it by tear the next couple of weeks," the ICC official website quoted Hazlewood as saying to Fox Cricket.

"Bowlers know their bodies pretty well these days, we know when something 's not quite right. I'll take the next couple of weeks as they come. It's a tight series so it will be tough work to get up for the last test. We'll see how we go," he added.

The pacer's injury means the ongoing Test has been reduced to 10-member per side after New Zealand debutant paceman Lockie Ferguson was also ruled out of the match with a calf strain.

Earlier, Mitchell Starc bagged a five-wicket haul while Hazlewood and Pat Cummins chipped in with a wicket each as Australia bundled out New Zealand cheaply for 166 runs on the third day in reply to their first innings' score of 416.