Hopefully we're in position to make playoffs before I leave on April 23: Jonny Bairstow

Bairstow will play two more games for the Sunrisers -- against Kolkata Knight Riders on Sunday and against the defending champions Chennai Super Kings in Chennai on April 23. 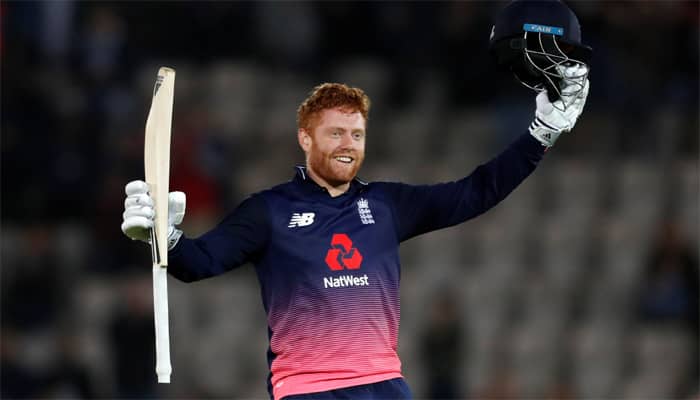 Sunrisers Hyderabad opener Jonny Bairstow on Saturday expressed his desire to help the team win the next two games and take few steps closer to making the IPL play-offs before heading back to join England's World Cup camp.

Bairstow will play two more games for the Sunrisers -- against Kolkata Knight Riders on Sunday and against the defending champions Chennai Super Kings in Chennai on April 23.

After that he will go back home to prepare for the World Cup, beginning May 30 in the UK, with the rest of the England ODI squad.

"So far it has gone well. To be in the top five leading run-scorers...It is really very pleasing. Hopefully, I can finish on a high in the next two games as well and we could be in the position to make the playoffs by the time I leave," said Bairstow during a round table conference on the eve of the home game against Kolkata Knight Riders.

All the English players featuring in the ongoing IPL are supposed to be back in England.

Currently placed fifth on the highest run-scorers list in the ongoing IPL, Bairstow's absence will be a big blow for the Sunrisers. In his debut IPL season for the Hyderabad-based franchise, the opener has scored 365 runs so far in eight games at an average of 52.14, including a hundred and a half-century.

"We get back after the Chennai game on April 23. Then we've got the World Cup camp. We then play Pakistan in the five-ODI series and further, we've got two warm-up matches in which we play Afghanistan and Australia. And then we go into the World Cup."

"It's a lot of cricket leading into the World Cup. And then we've got five Ashes Tests after that," Bairstow told reporters.

Asked which team according to him has the best chance of clinching the World Cup title this time, Bairstow said: "Lots of teams who could win it and there would be upsets along the way. West Indies could win a game from nowhere. Then there is Afghanistan, who would probably bowl 30-40 overs of spin."

"In England, you know you do not have pitches like India, which is really dry. Sometimes the pitches could turn in England."

Bairstow, who along with David Warner, formed one of the deadliest opening combinations in the IPL this season, said it was the first time he played with the Australian.

"When it comes to the balance of team, you don't know which four overseas players are going to play for a franchise in the IPL. But to be given the nod is really pleasing. It is the first time we (he and Warner) have played together," he said.

On how he and Warner would approach a game, the English cricketer explained: "Every discussion is different. When you open the batting you talk about assessing the conditions. Talk about different types of bowlers, different pitches. When you are chasing 200 and when chasing 130...It is a completely different conversation."

"We both play a lot of cricket, so it is a case of putting those experiences. Although you can't plan it down to minuscule details (how many boundaries and sixes you are going to hit). There are different bowlers, field settings and each ground is different. We look to play good cricketing shots."

"When it comes to the balance of the team, you don't know which four overseas players are going to play for a team. But to be given the nod is really pleasing. It is the first time we (he and Warner) have played together," he added.

Happy to have been picked up by the Sunrisers at the IPL auction despite him playing more Tests than T20s, Bairstow said it was fantastic to have great mentors, coaches and teammates.

"If you see I had been batting consistently at 6 or 7. I have never batted at no 3 or 4 in first class or Test cricket, so it was a completely different challenge. I am enjoying my cricket, to be honest. It has been very refreshing for me to come to a franchise and hopefully this is a starting point for many more years in the IPL."

Bairstow refused to agree that playing too many IPL matches would burn out the players ahead of the World Cup.

"Cricket is cricket and I think in IPL you play 14 games in six weeks and that is not too many. It is part and parcel of playing cricket. You play Test cricket and that is full five days...The guys bowl 20 overs in a day."

"However, there is a lot more travelling. You travel at strange times as the evening games finish around midnight. But it is good."

Bairstow said that the standard of competition at the IPL is very high.

"You got some of best cricketers playing in the IPL. Only four overseas players can play in a franchise. You look at our bench and there is (Martin) Guptill, (Mohammad) Nabi, Shakib (Al Hasan)...These are some of the guys who could be playing in any other IPL teams. So the standard is very very high here," said Bairstow.