Starting off well is always an important thing and we got together nicely as a team in the first half on the field, says Virat Kohli. 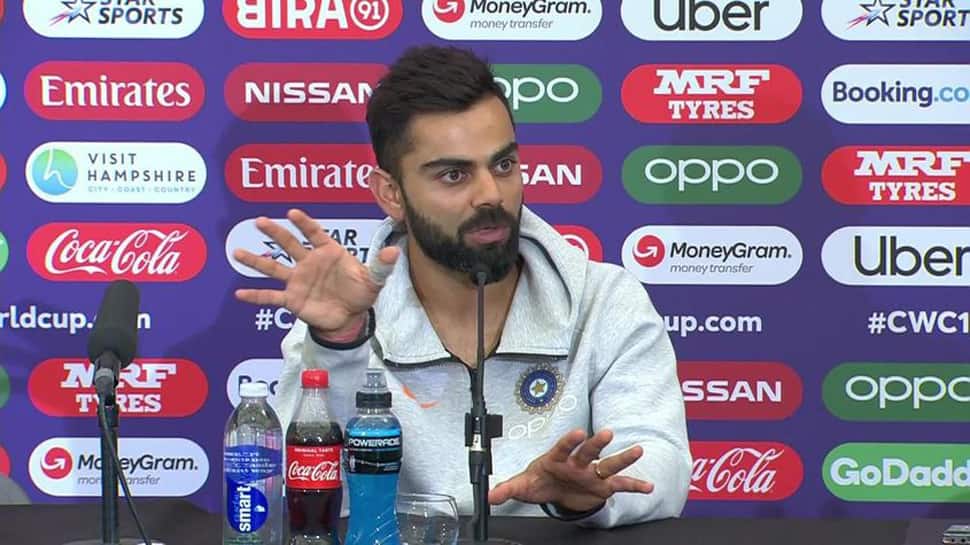 Team India has registered its first victory in the ICC World Cup 2019 in the opening match against South Africa, and skipper Virat Kohli is elated with the way overall performance. In his post-match press conference, Kohli lauded Rohit Sharma’s ton, calling it his best ever, and also showered praises on spinners. According to the captain, the spinners understood the wicket and bowled according, yielding favourable results.

Q. Just the first game, but have you ticked all the boxes?

Virat Kohli: I said in the post-match, I think it was a professional effort from us. It was a low-scoring game, not the highest of totals you will see in one-day cricket nowadays. That was because of the way the pitch was throughout the course of the game and I think, from that point of view, we were very professional with the new ball in the middle overs, the spinners picking up five wickets between them, was outstanding who finished well.

I think overall we are pretty happy with how we played. Starting off well is always an important thing and we got together nicely as a team in the first half on the field.

It is very important to create that energy and we were able to do that in the first ten and from there, we really built the game nicely and finished it off in a professional manner.

Q. You have seen Rohit score so many hundreds, different kinds of hundreds. Where do you rate this hundred and the quality of innings and how he paced, like the kind of player he is, he had to curb a lot of his natural flare. How do you rate this innings?

Virat Kohli: I think in my opinion this is by far his best ODI innings because of the kind of pressure the first game brings from a World Cup point of view. And then I know, as a batsman, when you go in and a few balls bounce like that, it's not easy to gather yourself again and play in a calm manner.

A lot of times batsmen tend to hit their way out of the situation. But he was very composed – he's played so many games, we expect a lot of maturity and a lot of responsibility from someone like him.

But, in my opinion, of all the brilliant innings I have seen him play, I think this, for me, was the top of the pile because of the way he compiled his innings and at no stage did we feel like, or he felt like he is going to throw it away.

I think controlling the game so beautifully from one end and allowing the others to display themselves and string in small little partnerships, looking at the fact that they were only chasing 228, he played the perfect innings for that kind of a situation on that kind of a wicket against a bowling attack that was threatening to pick up wickets at any stage. So, yeah, in my opinion, by far his best knock.

Q. Last year in South Africa both the wrist-spinners did really well against them. So how much of that was a factor in picking them for this game and particularly Chahal ahead of Jadeja who performed really well today?

Virat Kohli: A massive factor. We spoke about the fact the last time we played them, they were not that confident against our spinners. What we experienced was they were not able to rotate strike so well. They were trying to hit their way out of a situation which, for a captain, any day I would love batsmen trying to hit boundaries to get out of trouble rather than rotating strike because the risk factor is high.

The spinners together also understood and realised that that is the scenario and they bowled accordingly. I think Kuldeep bowled really well, he controlled the game from one end and I think Chahal was outstanding, the way he mixed his pace, the ball wasn't turning so much, but even with a little bit of turn and help from the pitch what he was able to bring out of the wicket was truly brilliant to see.

And breaking that crucial partnership and picking two wickets in an over was, I think, a game-changing moment for us, so both of them were brilliant in the middle overs?

Q. In Australia you had spoken about Bumrah's progression as a Test bowler. All through the year last year was about him as a Test bowler. How easy or tough is it, when you are making that progression from ODIs to Tests to maintain what you had in ODIs and you help his experience in Tests last year, help him back the all-rounder pace bowler that he is today?

He believes the length ball is something that he can nick people off with, whether it is a flat pitch, whether it's assisting bowlers or not, he can nick you off on any wicket and he has that belief now, which as a batsman, I know a bowler has that kind of belief, he is not going to do anything different to me, he is going to bowl consistently and still can get me out with good balls.

So as I said, the way he's bowling right now, it's so, so good to see because when you see batsmen literally clueless against him and he's rushing people.

To be honest, I haven't seen Hashim get out like that in one-day cricket. He's been so dominant. He might play shots and get out, but to get guys out like that, rushing them a bit, I think it's a great thing and it's a testimony to his hard work. He is very disciplined. He is working really hard at practice, in the gym, with his diet, with his rest. He understands this is his time and he's making the most of it so hats off, he's brilliant.

He has the right attitude towards the game and he's going to be a massive factor for us here.

Virat Kohli: Well, one thing you know with facing Jasprit is you have to play good cricketing shots against him and you have to back your technique against him. Because if you are hesitant a little bit, he senses that and he's all over you. If he senses someone's not enjoying the short ball in the net, he will make sure that guy gets it in that session.

So what you see him bowling in the match he bowls exactly like that to us in the nets. He doesn't care who is standing in front of him. He will bounce people, he will try to get people bowled, he will york people with the new ball and that's the reason for his consistency. He doesn't change his game because he's in the nets compared to the game.

He goes in with match intensity. He will do short and sharp, but those 15 minutes you have to make sure you are on top of your game otherwise it can be trouble. So he keeps all the batsmen really focussed on what they need to do which is a back-and-forth thing.

For a batsman, it's beautiful to face a guy like that who bowls with match intensity and he's looking to get you out, so when you play well against him you walk out with more confidence, so as I said he's brilliant the way he's progressed and hopefully he can keep going.