The "Balidaan Badge" or the Army insignia was spotted on MS Dhoni's gloves as television replays showed him stumping Phehlukwayo in the 40th over of the innings bowled by Yuzvendra Chahal. 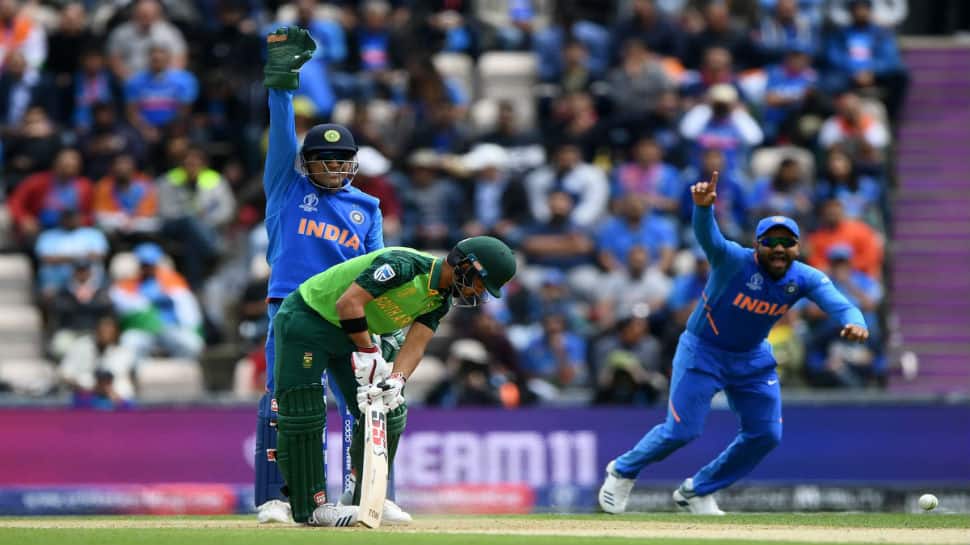 Southampton: India's opening game in the ongoing ICC Cricket World Cup 2019 saw former skipper MS Dhoni once again profess his love for the security forces after he was spotted with regimental dagger insignia of the Indian Para Special Forces on his wicket-keeping gloves.

During the course of India`s six-wicket win over South Africa at The Rose Bowl, Dhoni displayed the best of his game while stumping Andile Phehlukwayo and scoring 34 runs. The "Balidaan Badge" or the Army insignia was spotted on his gloves as television replays showed him stumping Phehlukwayo in the 40th over of the innings bowled by Yuzvendra Chahal.

The pictures of Dhoni`s gloves went viral on social media within no time and fans poured in love and respect for the 37-year-old.

Balidaan is a distinct insignia of the special forces, which form part of the Parachute Regiment. It has a commando dagger pointed downwards, with upward-extending wings extending from the blade and a scroll superimposed on the blade with "Balidaan" inscribed in Devanagari.

It was not the first instance when Dhoni was seen making his support for the Indian forces public on the cricket field. After the Pulwama attack in which 40 CRPF troopers lost their lives, Dhoni had come out with an idea of wearing camouflage caps during an ODI against Australia in March. The entire team, along with Dhoni, was seen sporting camouflage caps in their bid to pay tribute to the security personnel who lost their lives in the terror attack on February 14.

The Indian Territorial Army had in November 2011 conferred the honorary rank of Lieutenant Colonel in the Parachute Regiment to Dhoni. However, he did his training under the Para Brigade in 2015. In 2018, Dhoni had appeared in his Lieutenant Colonel uniform to receive the Padma Bhushan award at the Rashtrapati Bhawan on April 3.