Scotland and Ireland made a one-two finish in the group stage of the International Cricket Council (ICC) U19 Cricket World Cup Europe Qualifier 2019 to set up a summit showdown clash with each other on Tuesday. 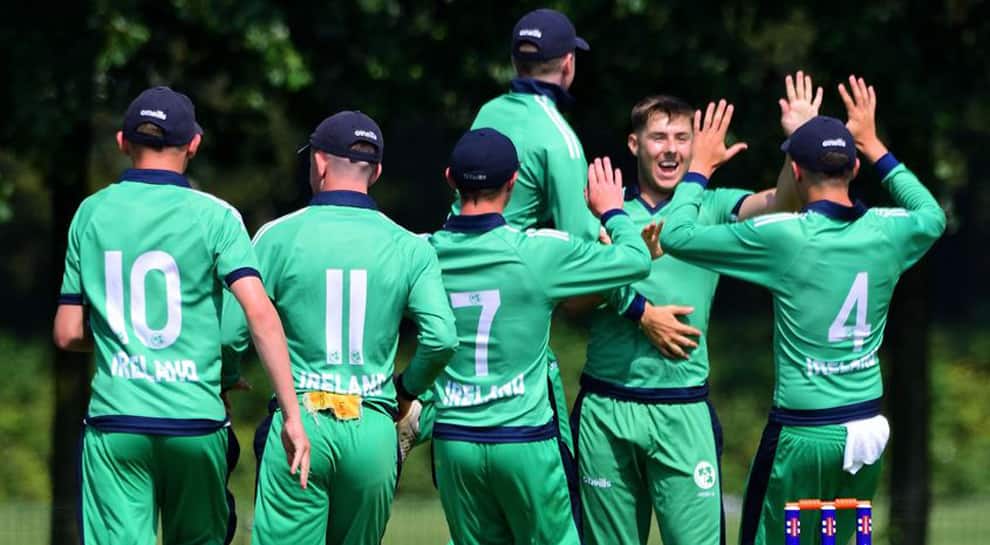 Scotland and Ireland made a one-two finish in the group stage of the International Cricket Council (ICC) U19 Cricket World Cup Europe Qualifier 2019 to set up a summit showdown clash with each other on Tuesday.

At Excelsior ’20 in Schiedam, Ireland took on hosts the Netherlands in a crucial encounter on the third day of the tournament. Ireland got off to a horror start after choosing to bat, losing both openers without scoring in the first nine balls of the game.

Alex Stiles (53 runs) and Will Smale (60 runs) led the recovery for Ireland, batting with composure and patience to get their side out of trouble. The game looked evenly poised, as Netherlands took wickets at regular intervals, preventing Ireland from racing away to a big score. Ireland finished their innings on 213 for 8.

Netherlands struggled early on, Alex Neary (3-17/7) taking three wickets to dismiss the Dutch top order and put Ireland on top. The fightback came from Kevin van der Geest (48 runs) and Nehaan Gigani (42 runs), who put on a partnership that threatened to turn the game in favour of the Netherlands. James Hunter (3-14/5) provided the breakthrough Ireland were looking for by dismissing Gigani with the score on 118. Regular wickets followed and Netherlands were left 69 runs short of the target when the final wicket fell in the 44th over.

In Voorburg, dampness on the pitch pushed the start time back by 30 minutes in sunny conditions in the game between Jersey and Denmark. After choosing to bat first, Jersey found themselves in trouble after losing early wickets to adventurous strokes.

The Jersey side showed their depth in strength, with strong performances from their middle order batters who built partnerships to get their side out of trouble. Matt Daubeney (75 runs) combined with Zak Tribe (33 runs) and Julius Sumerauer (37 runs) for a 76-run and a 54-run partnership respectively. Attacking stroke-play in the late stages got the Jersey score to a defendable 233 after 50 overs.

A wicket on the first ball and tidy opening spells with the ball for Jersey from captain Harrison Carlyon (3-24/8.5) and Chris Carnegie (1-27/7) put pressure on the Denmark batters, who struggled to pierce the field. Jersey was able to maintain their momentum with change bowlers Julius Sumerauer (3-28/7) and Josh Lawrenson (2-15/6) contributing with wickets.

With the score on 66 for 7, Denmark looked in serious trouble when Aden Aftab (22 runs) and Abdullah Mahmood (12 runs) staged a small recovery to get the Denmark score to over 100. Jersey secured the win in the 29th over, taking the final wicket with the score on 103.

On the fields of VRA in Amstelveen, Scotland scored the highest total of the day against France. Batting first in good conditions after winning the toss, the Scotland openers started positively, hitting the ball to all corners to set their side up for a massive score. Durness Mackay-Champion (63 runs) and Angus Guy (137 runs) put on a phenomenal 121 run partnership for the first wicket inside 18 overs.

Tomas Mackintosh (47 runs) just missed out on another half century, adding another 91-run partnership for the fall of the second wicket. The wicket brought no relief for the French, as Jasper Davidson (56 runs) continued to play with the same intent in another 100-run stand with his captain. Guy came close to batting through the innings but fell to a run out in the last over, attempting to get the score as close to 350 as possible. The Scotland innings ended on an unassailable 348 for 4.

France were confronted with a daunting task, attempting to get close to the Scotland total. They found themselves in trouble early, struggling for runs and losing wickets regularly. Opener Hassan Raza (38 runs) showed patient resistance as he faced 98 balls for his 38 runs, while wickets tumbled at the other end. Raza was eventually the ninth batter to be dismissed, with the innings ending shortly after with the score on 95. The Scotland bowlers shared the wickets in their 253-run win, with Daniel Cairns (4-19/7.4) the stand-out with four wickets.

As a result, Scotland and Ireland remained unbeaten in the group stage to finish at the first and second positions, respectively in the point table with three wins each.

On Tuesday, Scotland will face Ireland in a crucial encounter, with the winner opening up a two-point gap at the top of the group, with just one round left to play for the sole spot at the ICC 2020 U19 Cricket World Cup in South Africa.

Write Steve Smith off at your peril: Steve Waugh sends warning to England